Everything's turning a sickly green hue here at AEET today, and it's all because of this week's fantastic Friday Frights EC double creature feature-- good lord *CHOKE!* Yes, little green men from outer space get a mighty slimy, monstrous make-over in these two terrific tales of terror from beyond the stars. And let's kickstart this rocket into hyper-drive with a down-home farmyard freak-out of epically eerie proportions from the November - December 1952 issue of Weird Fantasy #16 (oh god, that ending *SOB!*), --followed by a truly ominous oddity highlighted by some of the nastiest lookin' green thingies ever to creep their wicked way into our screaming sector of the galaxy, from the September - October 1951 issue of Weird Fantasy #9. Both tales are illustrated by joltin' Joe Orlando! Both written by astoundin' Al Feldstein! And both colored by the ever magnificent Marie Severin! It's Sci-Fi Friday Frights Month at AEET --hurrah! 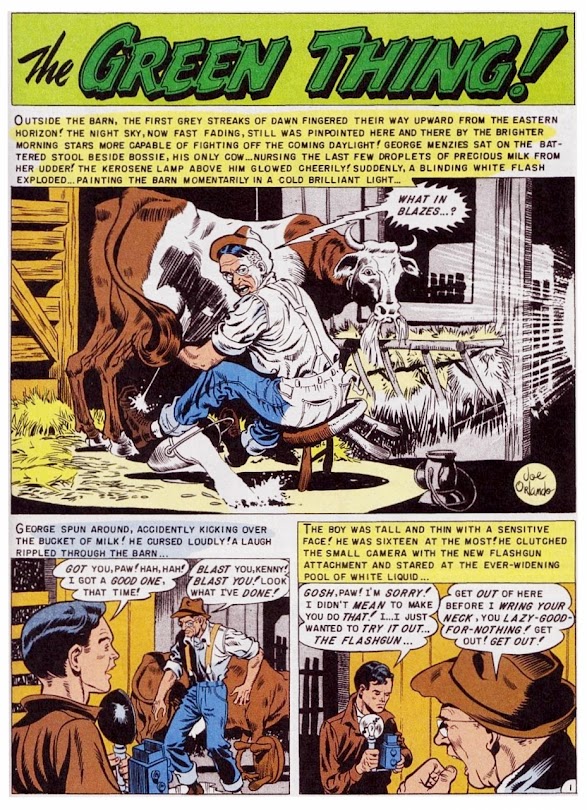 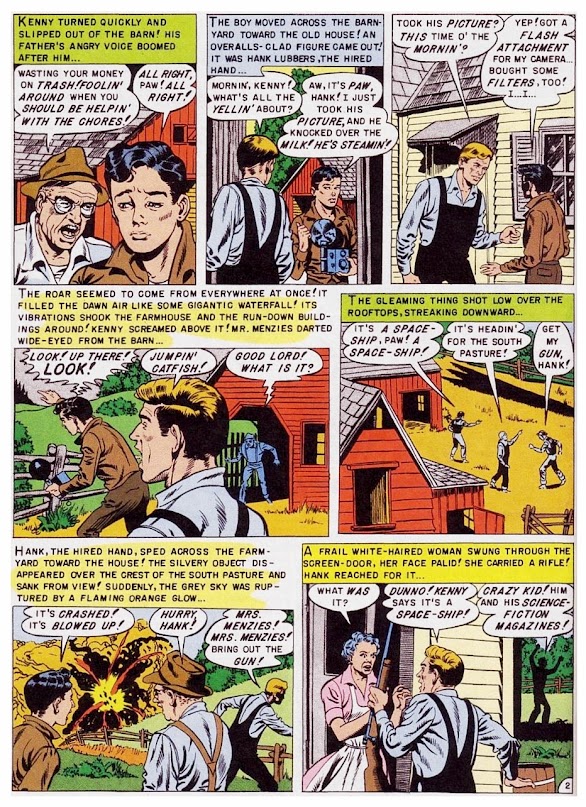 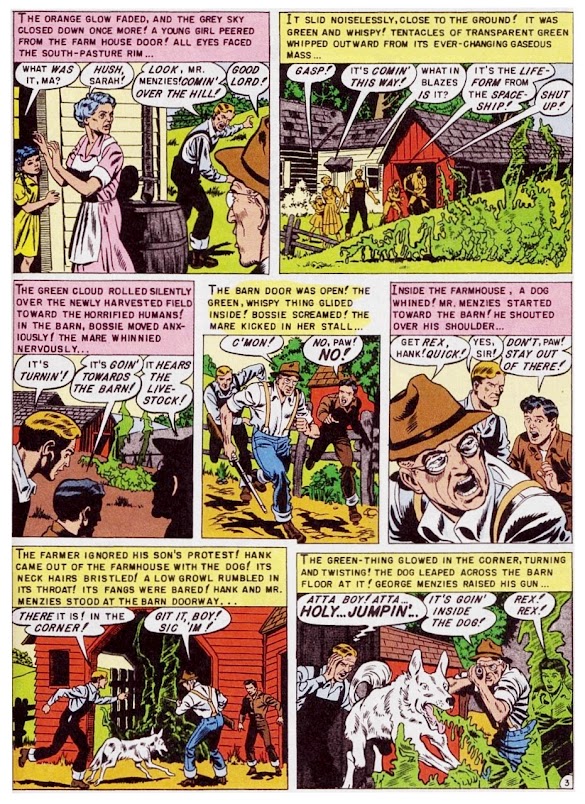 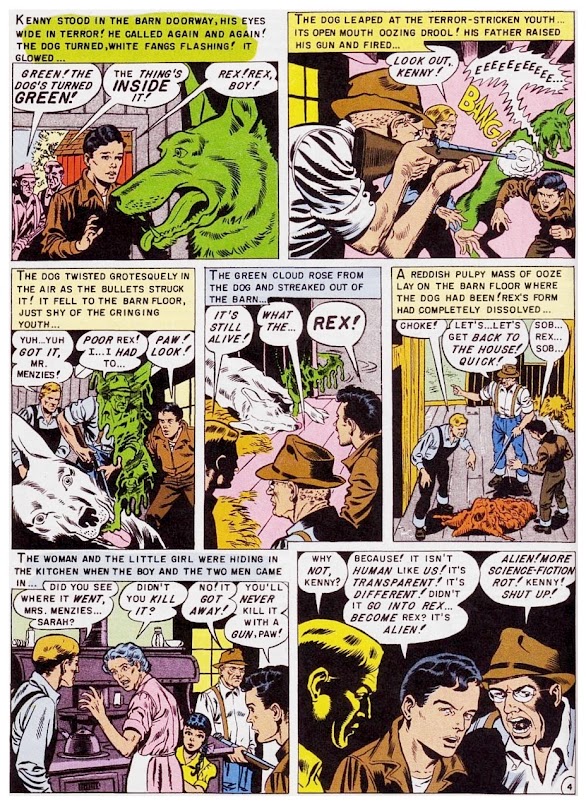 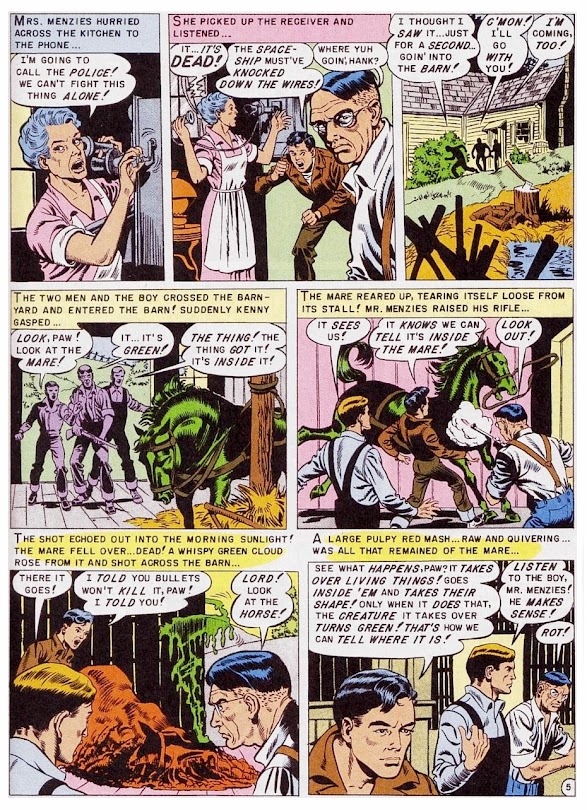 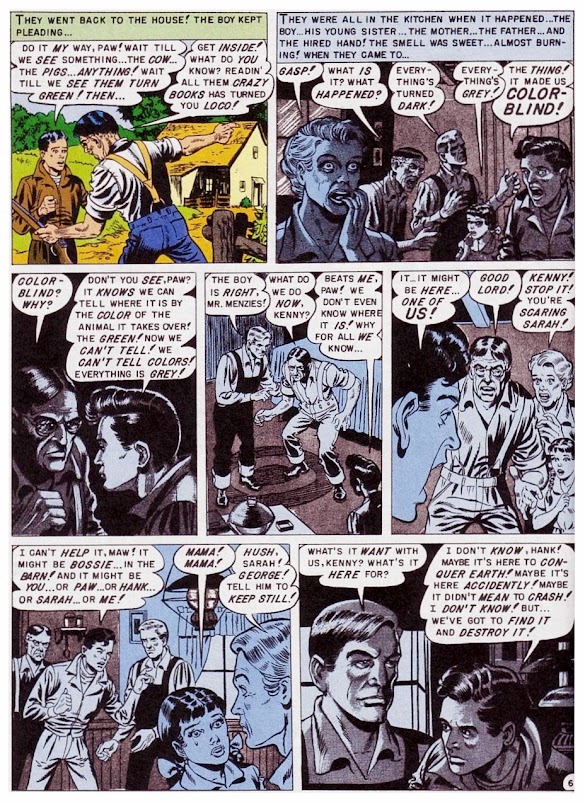 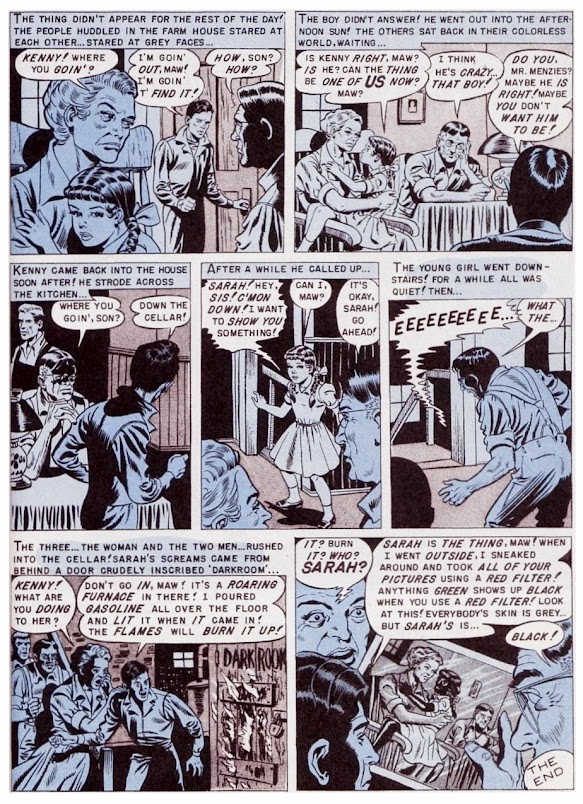 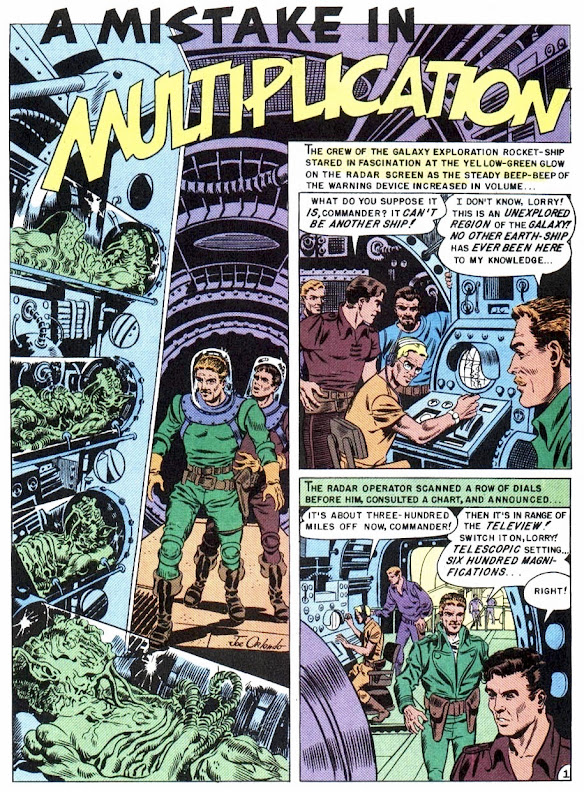 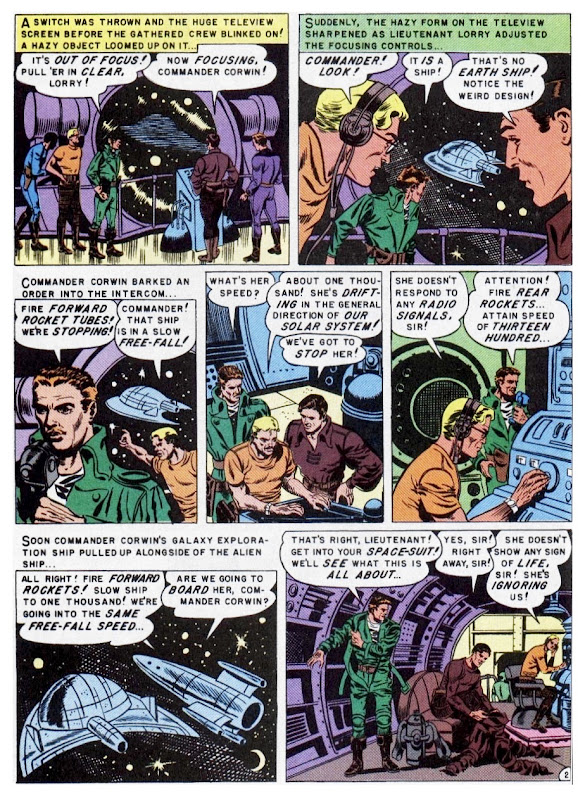 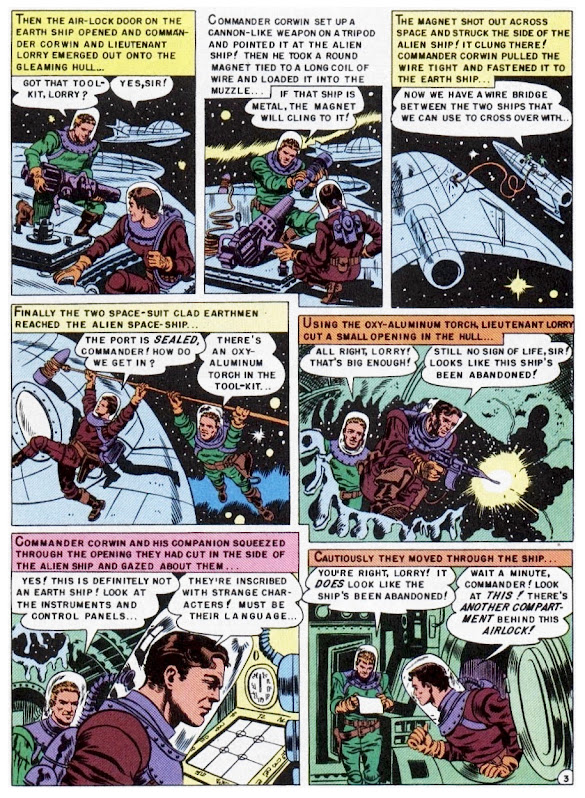 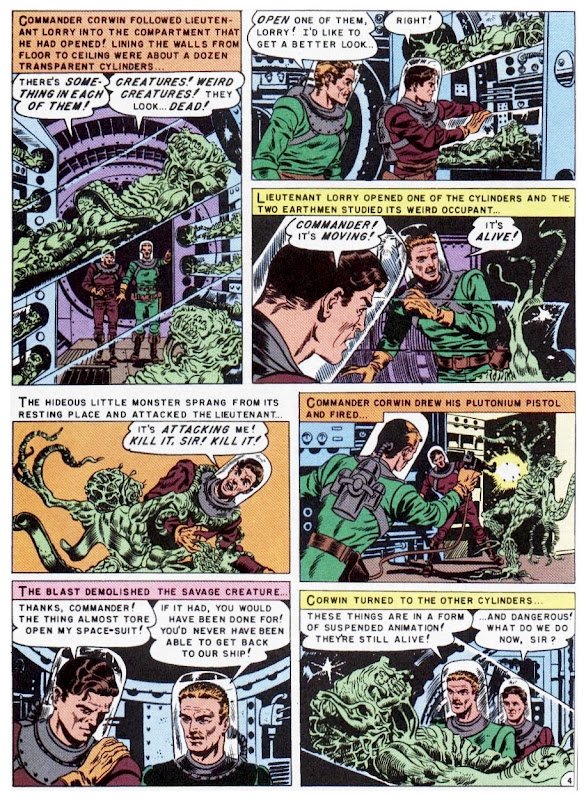 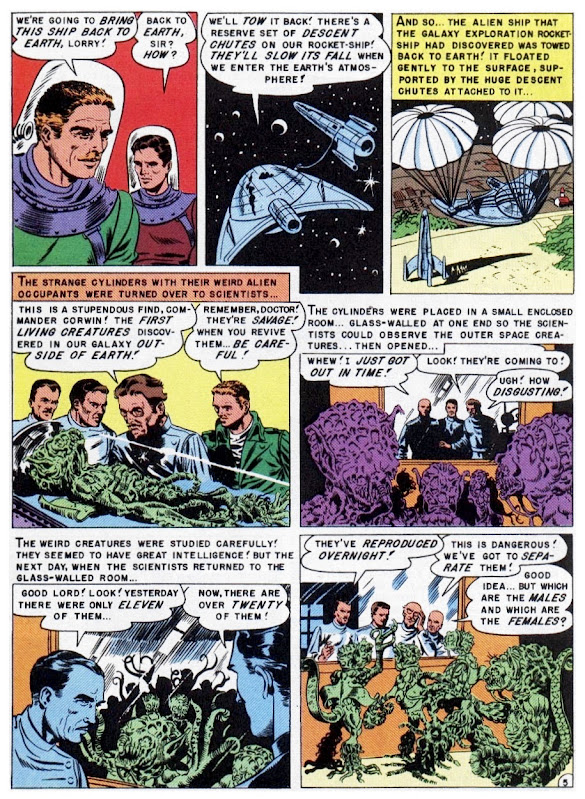 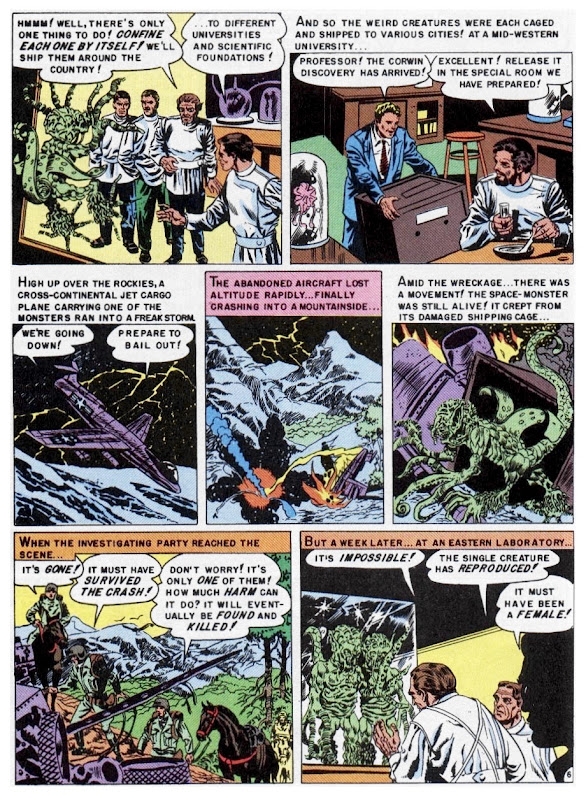 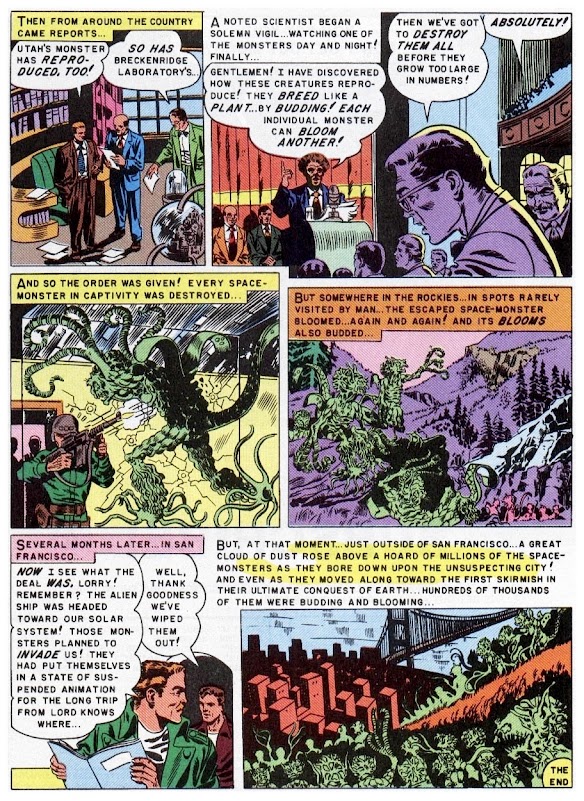 It shows you how good Orlando was, in the sci-fi books he could basically hold his own next to Wood and Williamson!

Both really fun EC standard formula stories; both played it very fair, both had the one unbeliever (the father in the first, what kind of evidence does he need at this point?!?!) and the other ... basically the entire Earth. Yeah, tow that thing to Earth, good idea!

Orlando really knocked it out of the park with the two monsters. The gas monster was a bit more scary, IMHO, but the plant monsters were also great.

Shout out to Orlando for his great buccaneer lounge wear in the first page of the second story!

You know, I kinda noticed the color job in the first story started out a little prosaic for Severin. Turns out she was just setting us up. I really dug both of these, but it was that one that I really think knocked it out of the park. Part Color Out of Space part Who Goes There, each kind of rejuvenated by the other, with a new wrinkle or two here and there. Joe and Marie really knocked it out of the park during the colorblind bit. I love the partial use of halftones and the limited palette of blue values.

I can't believe that the second I get on an airplane you post a magical EC double-header. I almost didn't see it down here. I'm never budging from the front of this computer again.