Scored this nice looking Ben Cooper Spiderman "TV Hero" costume and box for $8 today. It's all there, minus the clear plastic window (which is no real loss as that usually seems to be the first thing about these old costumes that breaks next to the rubber band on the mask.) But say, who's that crazy generic dude on the side of the box though with the cross eyeglasses? I totally wanna be him!! Or no wait, the bald clown ape on the other side! I do have to add that it's fun being reunited with the 'ol web head costume I wore for Halloween in the early 70's around 1st or 2nd grade-- which, come to think of it, I believe was the one and only time I ever dressed up as a superhero! After that it's been monsters every year since... 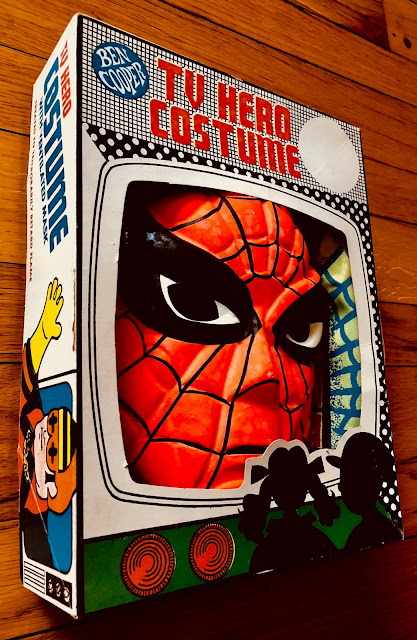 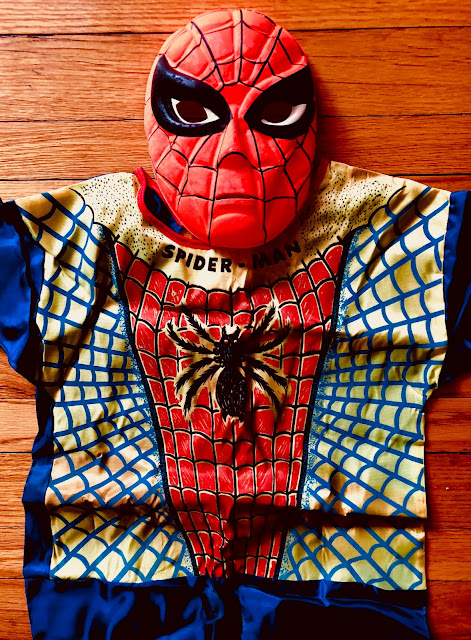 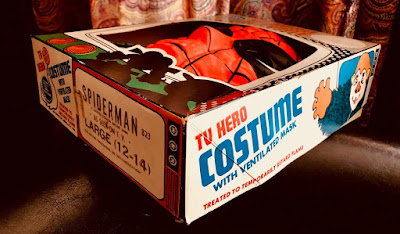 Hey, that is a pretty solid off-model Spidey costume. Other Spider-Man costumes I've seen may have been a little more accurate in the vinyl onesie area, but have been far less good in the plastic facial parts. Good choice, second-grade Karswell!

I think the Bee-Man on the side of the box would look a little more holiday appropriate with exes instead of pluses. Clown too.

It’s pretty much the same Spidey as the one Cooper introduced in ‘63... seems the only thing that really changed throughout the years was the box art design

Hmm. You seem to be right. I may be mixing it up with that half-assed poncho costume--but I was remembering was a straight-up vintage Cooper costume with the red and blue onesie and a mask designed with even more simplified webbing and no topographical details. I can't find a picture of it, so it might not have existed. Or perhaps it was some eighties Chinese knock-off.

I like that weird yellow Spider Man hoodie costume from the fifties, too. Looks more like Electro.

Haha yeah, that was a Spider-Man before THE Spider-Man

Mestiere said...
This comment has been removed by the author.
August 28, 2018

You've struck my memory nerve with this one. I can't describe the mixture of joy and disappointment I had with this costume. This was my first grade Halloween costume in 1974. I can still remember proudly proclaiming to my teacher Miss Lammert and the rest of my class at Point School that I was indeed going to be Spider-man for Halloween. Aside from the yellow poncho and furry spider emblem (with eyes no less!), I hated the that the nose, mouth, eyes and even chin and cheeks were molded into the mask. It was the only superhero costume I ever had and in fact, the only store-bought costume I ever had again. The rest of my childhood costumes were all homemade.

Sounds like we were both Spidey for 1st grade! Haha... I went to Bernard until the middle of third grade and then made the switch to Oakville. I guess we’re practically neighbors, Tom!