I almost started collecting vintage 1950's lanterns the other day after stumbling upon a really neato red one in its original box (apologies for forgetting to get the freakin' name of it-- arghh!) The lantern itself was in fair condition, but what was truly right up my dimly lit alley, were the incredibly cute illustrations on the box it came in, of which I happily snapped a couple pix with my camera phone the second I set my eyes upon 'em. And yes, though I may be a middle aged man at this point in my lengthy 'ol life, I have to admit that I most definitely identify with the first set of 6 images below, much much more than the second. 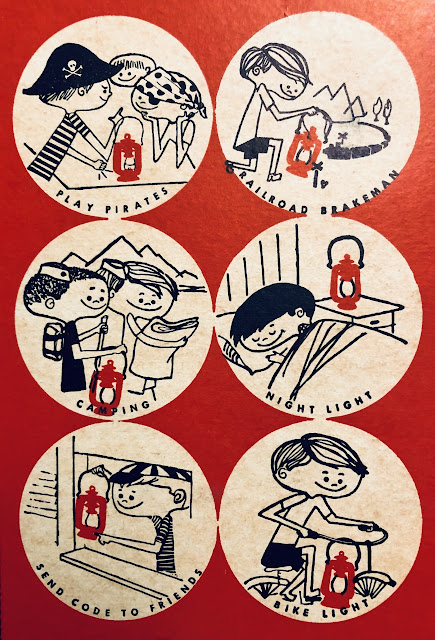 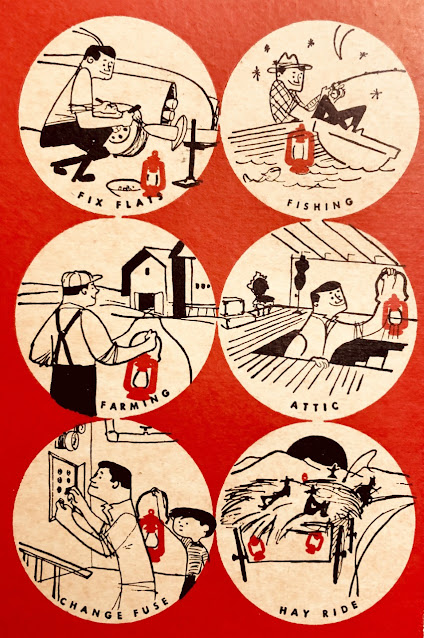 I'd pick the second set, the attic is where I summon the dark forces and the hay ride is where I make out with them!

This reminds me that I forgot Talk Like A Pirate Day this year (what with everything that's been going on that's not too surprising). Oh well, I don't speak Somali anyway.

Are dark forces exothermic? You'd better have a fire extinguisher ready in that case, though it would probably cool off the ardour.

The world is sorely lacking cute illustrations like this on packaging today!

I agree. Illustration and packaging is a huge issue with me, and I simply will not buy something that is boxed in a lousy design, Never ever, and I don't care what it is.

Casting certain shadows on the wall in the dead of night is my middle name!

I question its use around hay. I set a hay bale on fire with a lantern years ago. Long story.

I like the way the package is really careful to tell us that we are only to play at being pirates, but that we could certainly go right out and stop freight trains for real with this thing. They love that!