I saw this totally hilarious kid's "Slumber Party" overnight case at an antique mall the other day, and while I don't really need to spend that kind of money on a giant piece of retro luggage that I would likely never even use, I definitely felt the need to take a picture of it for all of you to see. Featuring two unaware young ladies already in their PJ's and being peeped on by what appears to be a pair of prepubescent panty plunderers from next door! Good lord, who really knows what their true intentions are-- or is it just innocent leering, panting puppy love? 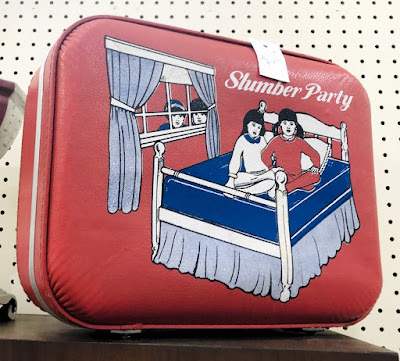 Funny, but with just the simple addition of a lightening bolt outside the window, their true intentions suddenly become quite clear: 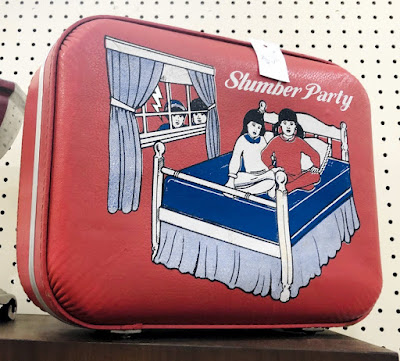 And with yet a third simple addition, we see that Mr. Karswell has probably watched too many horror movies in his life.... if, you now, that is even possible. 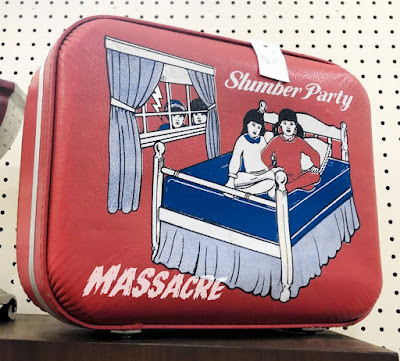 I suppose that I could've gone even further and added a 2 after massacre, and then on and on until the guy below showed up and eliminated everyone on the original suitcase: 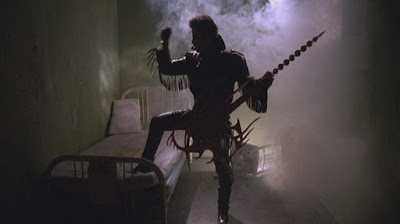 But no, let's think of the children and the fun time they had just munching on chips, spinning some 45's, giggling about boys, and then later around midnight they wander into the bathroom and turn out the lights and while standing in front of the mirror and holding a flashlight underneath their trembling little dimpled chins, they summon Bloody Mary, and then... *re-insert lightening bolt
Posted by Mr. Karswell at 12:06 PM

Haha, well if I ever drive out that way again (2?hoursxaway) I’ll see if it’s still there

Slumber Party Massacre II, I guess it finally got a piece of branded merchandise!

That suitcase is amazing. And good timing, because we just watched the first few minutes of Slumber Party Massacre earlier this evening, although we tired of the commercials and watched something TiVo'd instead.

Let's see... (counts on fingers) two's company, three's a crowd, so four must be a party! Hope those boys BYOBed (for spinnin').

You know if you go back and get that thing you'll have to paint in the missing bits with glittery nail polish.

The suitcase made me think of Steven Rhodes T shirts, images of youngsters messing with the occult but portrayed in a sweet, innocent kind of way. You have to see them for yourself to understand.

Haha now that you mention it, the art does look very much like the Rhodes stuff, lol... well, maybe I just gave him a new idea for his next multi million dollar selling tee shirt