It's only just now December, but xmas actually arrived early, especially after waltzing into a brand new Jeffco MO antique mall and spotting a booth selling a handful of Syroco hand carved, wood figures from the 1940's! A fun variety of these were offered back in the day for a mere quarter through a Pillsbury mail away ad coupon (see below), the most popular of them being the King Features Syndicate comic strip cartoon characters like Popeye and Blondie, for example, but the most rare and sought after of them seems to be Lee Falk's The Phantom, of which I was so incredibly lucky enough to find! He apparently came in two versions, the brown version that I found, and an even rarer purple type that is closer and more "on model" to the original character design. Still, researching this character's actual worth online, compared to the heart stopping fraction of that cost in what I paid (shhhh, $20), and I'd say that yes Virginia, --there is a Santa Claus! 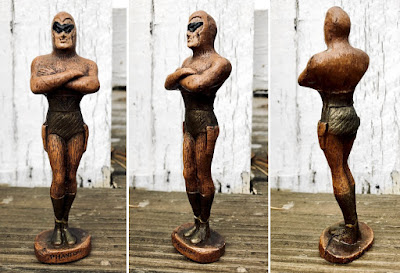 Okay, his mask isn't painted on so great, and like most of these that do turn up, he's been broken at the fragile, thin ankles, though glued back together. Other than that, he seems to be in excellent condition with little to no wear or other paint loss. Here's the original ad coupon:

And I also grabbed a Katzenjammer Kids Captain from the same antique mall seller, for the same low low price! 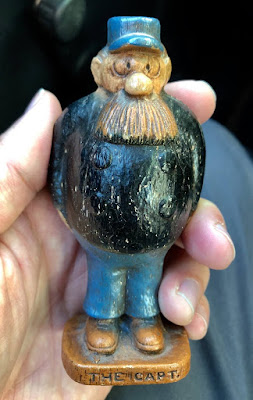 These are so great and I have never even heard of them before. I hope you find a lot more--I especially want to see the Blondie characters. I have no idea how I am supposed to imagine Dagwood's hair in three dimensions.

And the kids in the ad are killing me. Cue Halloween theme.

Would love to find a Blondie and Dagwood for sure. And anything from Popeye. They had a few more at the antique mall but I’m not really into Tim Tyler and whoever else it was they had.

Great find you have there. I am an avid Phantom collector and paid close to $1K USD for my brown Phantom syroco.