As long as we're on a horror kick, let's up those kicks with an article lurking within the tame pages of TV Radio Mirror Magazine, from May 1959. It's an interesting look at the dawning age and evolution of violence on tv, highlighted by some nice photos of late show horror hosts Zacherley, and Portland Oregon's very own Tarantula Ghoul!  It's an interesting read, and of course written in a style that is very typical of every generation that looks to find blame for this so called "kick", whether in films, newspapers, magazines, comic books (of course!), and even fairy tales. 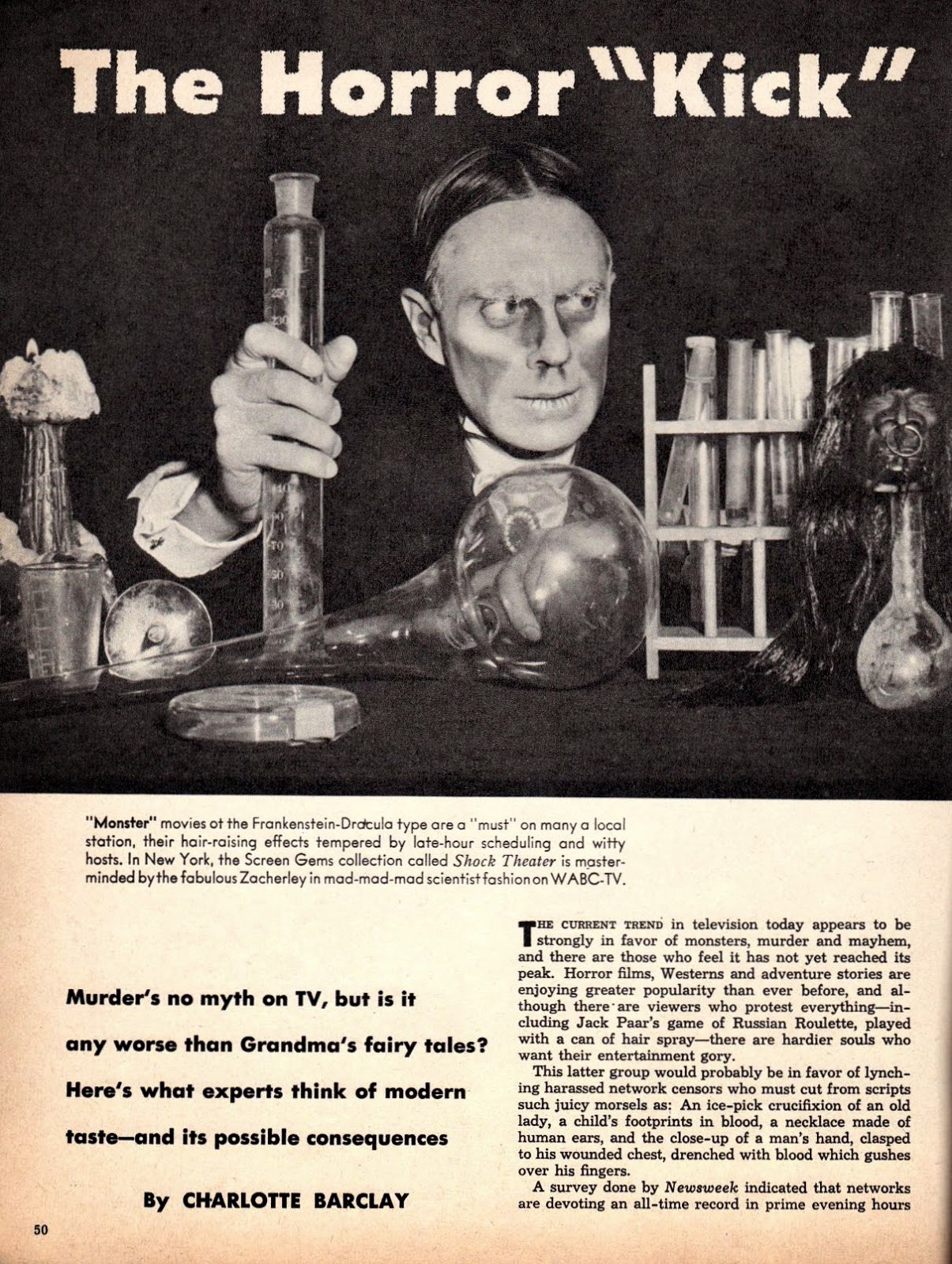 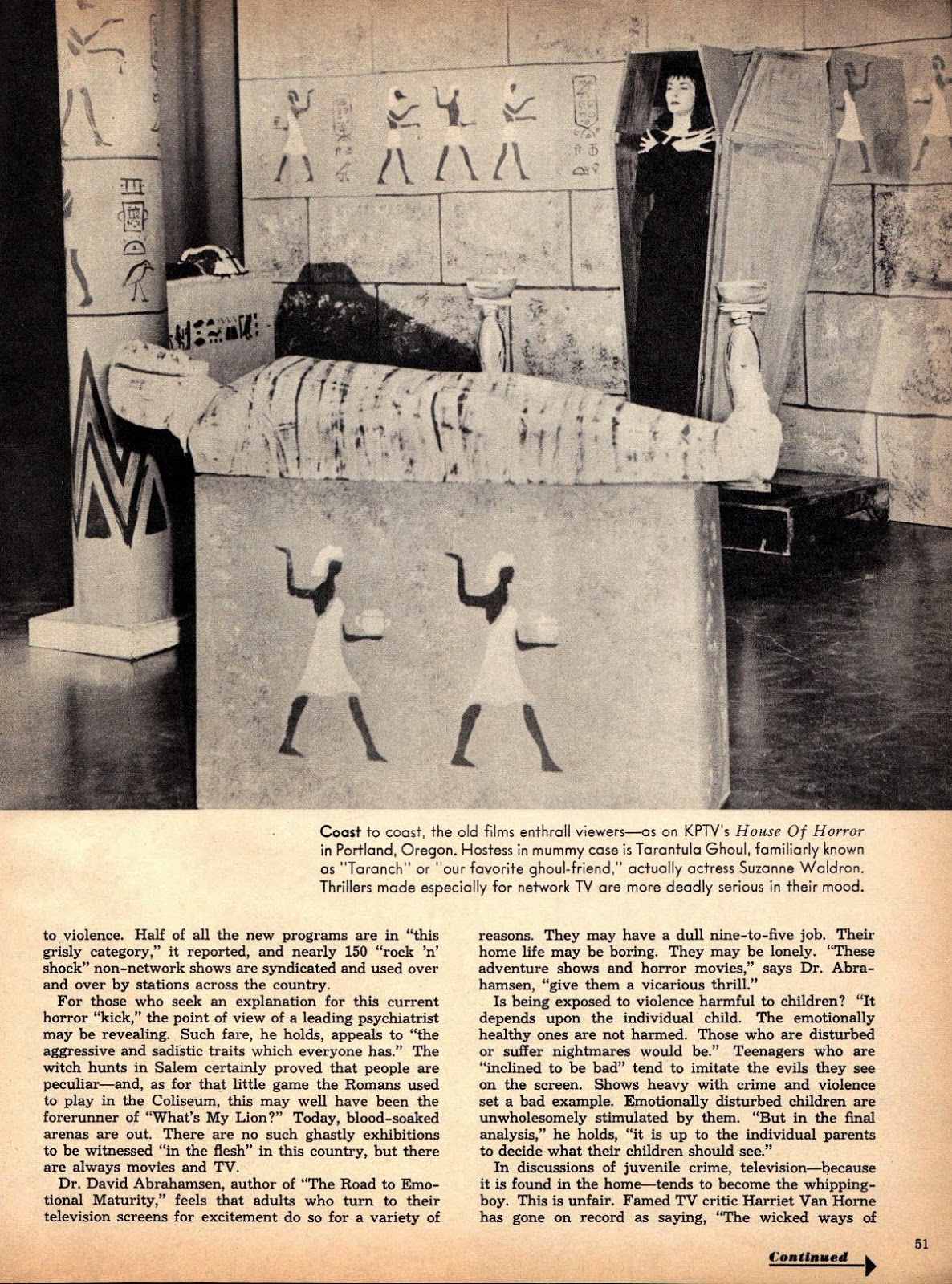 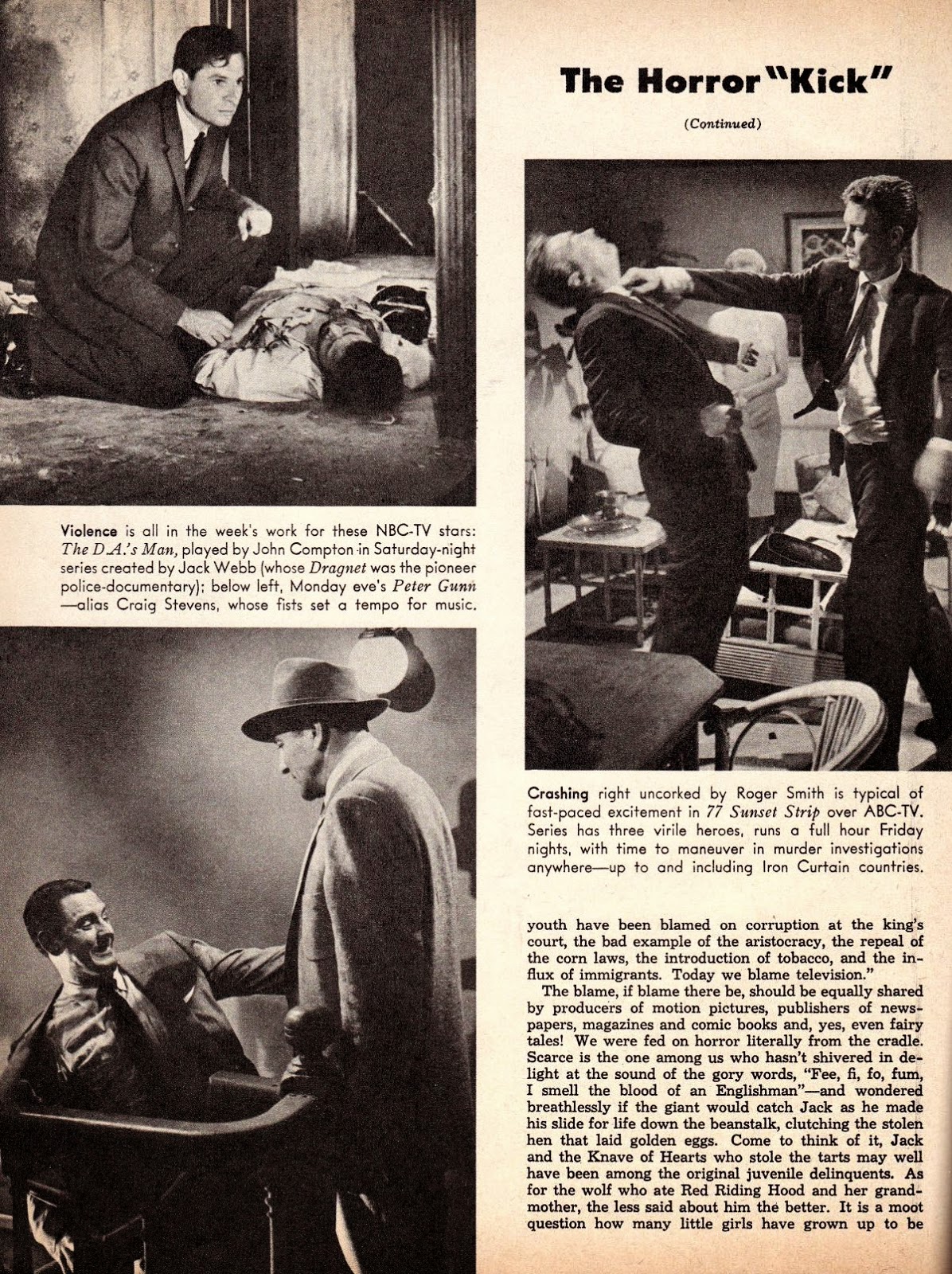 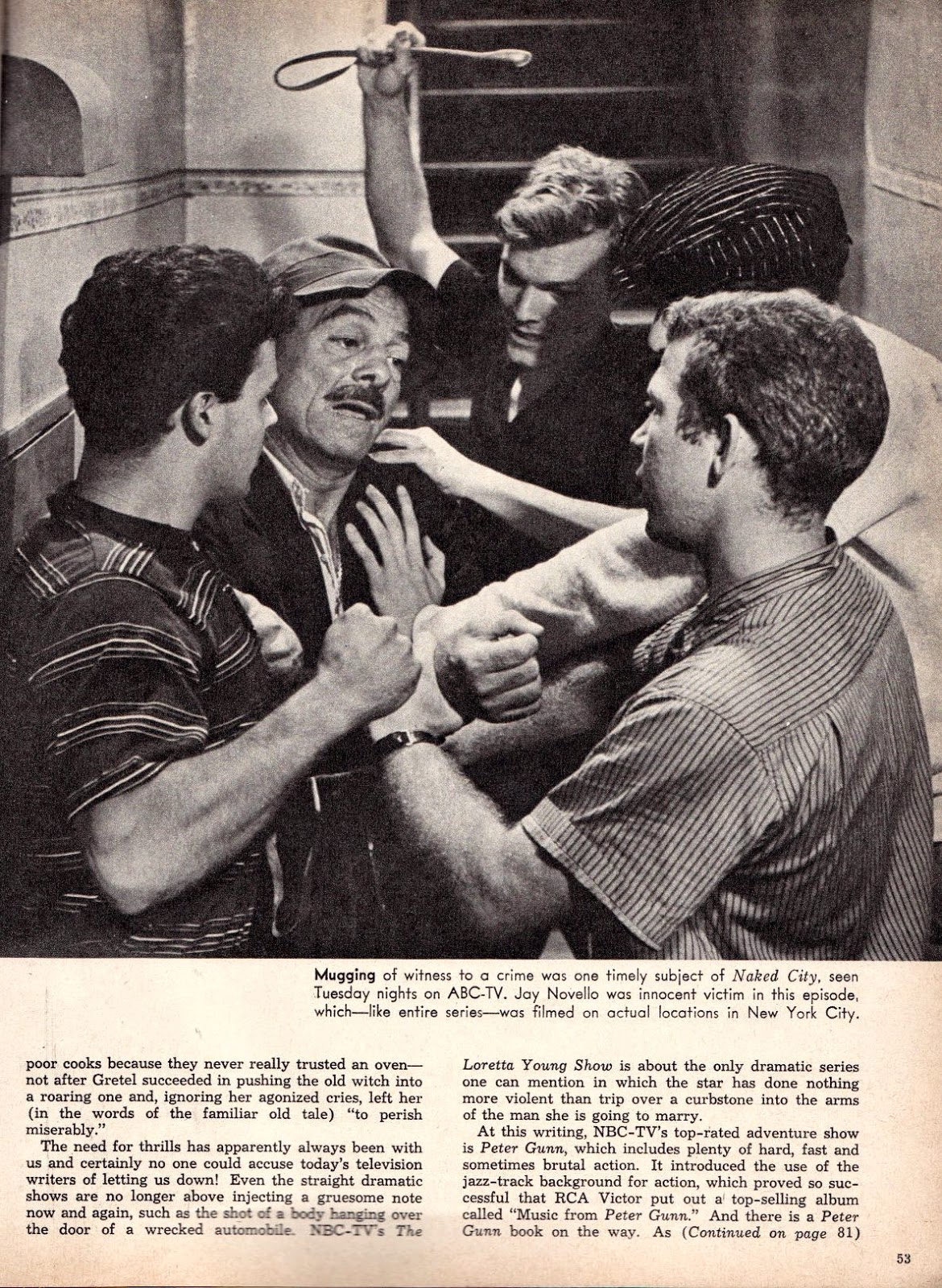 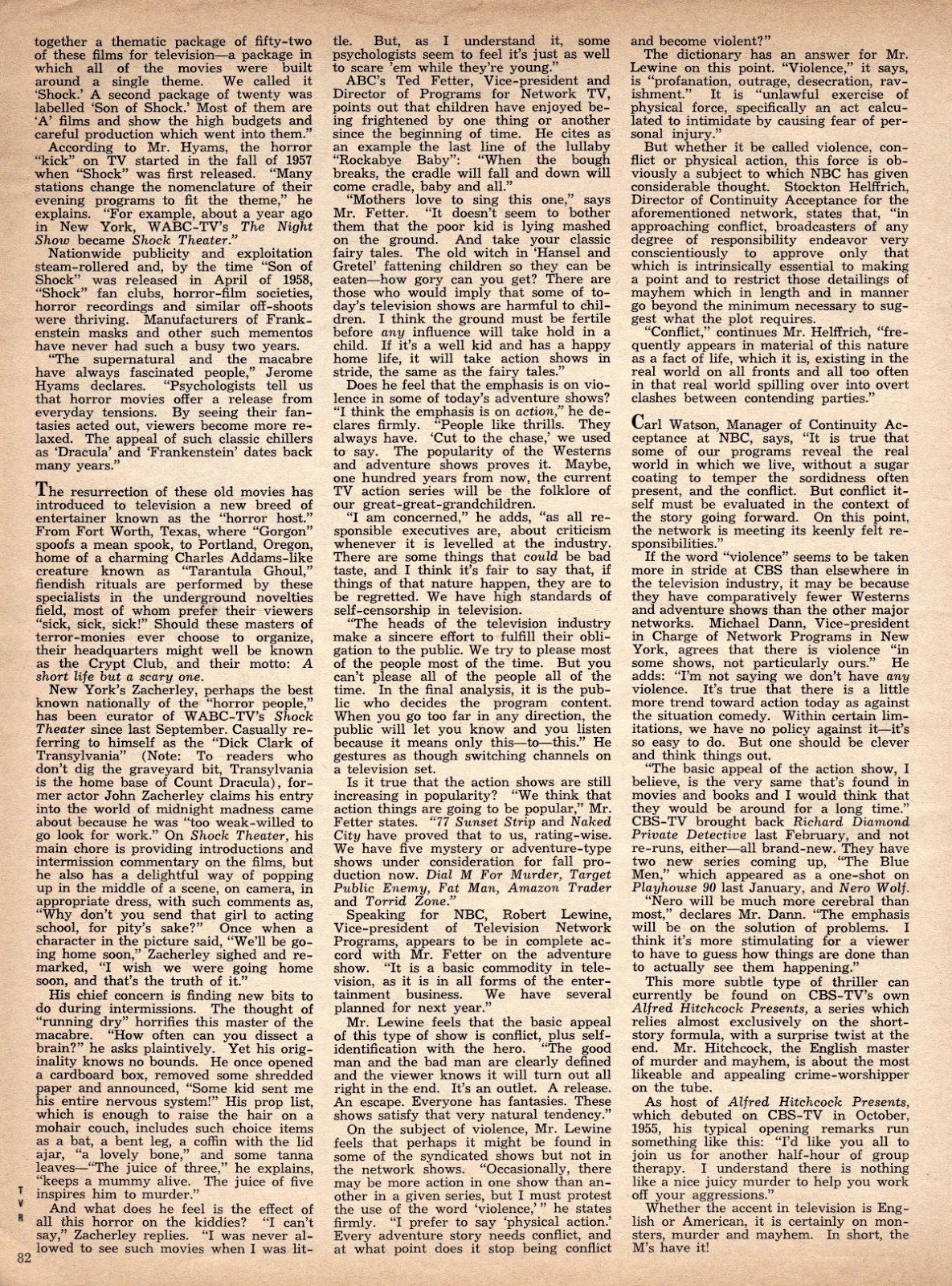 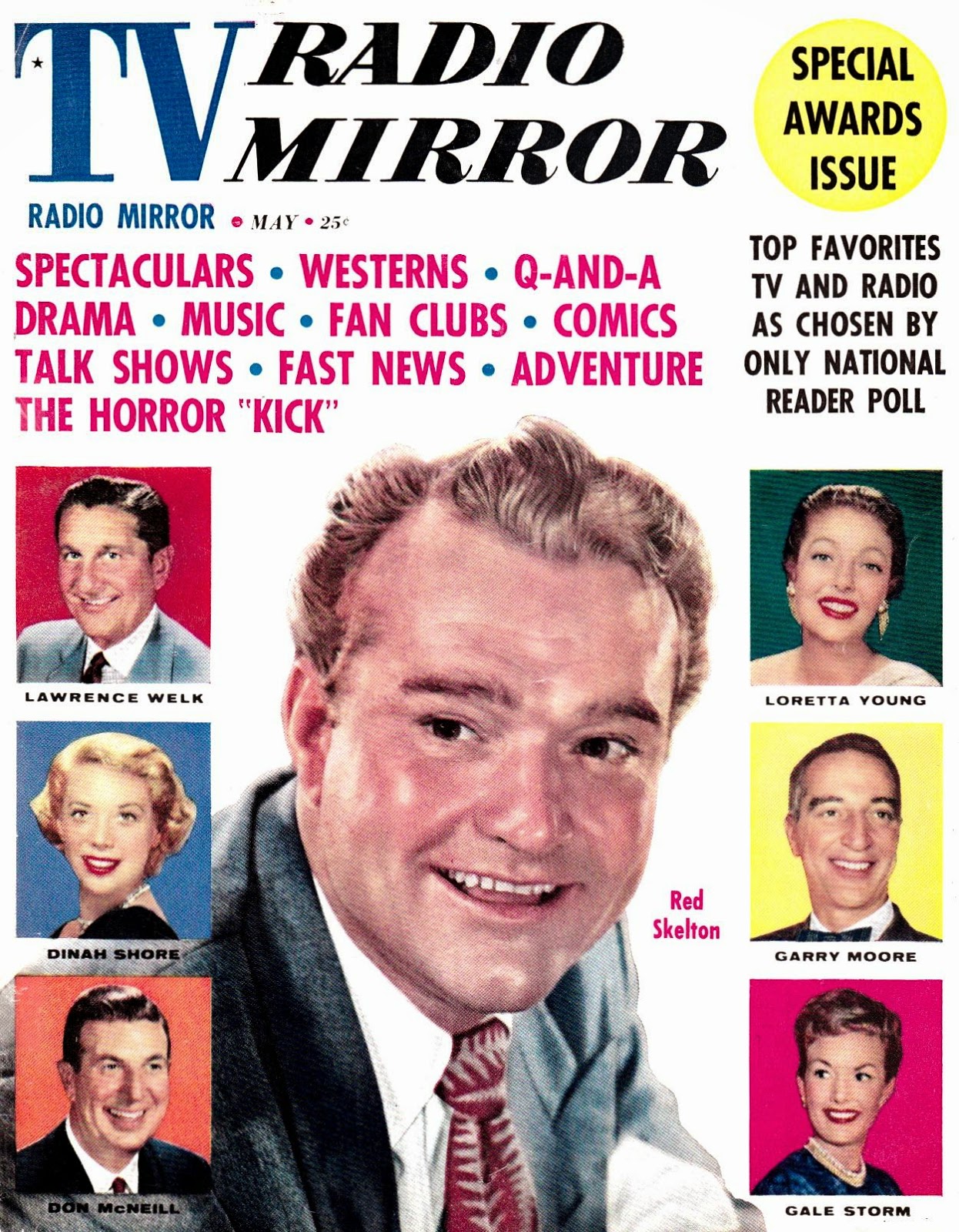 Great post. Not being very familiar with 50's horror hosts I was intrigued by "Taranch", and did a little search. Her story is interesting indeed.

Most horror hosts are! :)

Honestly, a large part of what I like as an adult can be directly traced to Son of Svengoolie (still going strong!) that I watched as a kid. I liked universal because of him, I liked the Wolfman because of universal, and I got into comics because of WWBN.

These guys/gals were national treasures.

57 would have put her 3 years after Vampira.

cool! i've never even heard of her!

I like NBC's Robert Lewine's take on violence as physical action--last page of the article, bottom of the middle column--and I was sorta croggled by the columnist's rebuttal. What kind of screwy dictionary includes a stipulation of unlawfulness in its definition of "violence"? Turns out that's an actual Dictionary of Law, apparently TV Radio Mirror's go-to English language desk reference. Kinda creepy, though. Seems like a permission slip for the police. What's the technical word for lawful violence, anyway?

Man, those Shock packages changed the popular landscape by altering no less than the content of television itself, creating the Monster Boomers, providing the gestational spark that became home video, etc. Shock solidified a body of work that was mostly considered mutable and temporary when cranked for regional audiences, and incidentally authenticated a genre canon. It's neat to read such a positive contemporary piece, innocent of the cultural importance we attach to the subject in hindsight. Great article!

Well said, Mr C! It's a shame that young people today won't know the special factor that comes with only getting to see a movie or tv episode when one of the networks or local channels decided to show it... these days you can watch anything you want whenever you want it-- maybe it's just me, but it really doesn't feel that special when it's that accessible.

If anyone is interested, here is a link to horror hosts past and present-

I agree with you, Karswell, having horror on demand is convenient, but it lacks the enjoyment of turning on the tv, sitting back and watching the horror program as it unfolds. Waiting for the scary (or shlocky) horror host to pop up and add some pizazz to an otherwise stale B horror, even waiting for the old familiar local ads that practically every tv station had was all part of the experience of enjoying a horror movie on tv. You became a participant of sorts while watching the old horror flick, timing it just right to grab a snack or go to the bathroom while the commercials were running, hoping you wouldn't miss the movie coming back on before the commercials ended. Even now when watching a horror flick on tv it is a passive but relaxing form of entertainment, you can just sit back and relax and forget your worries for a little while and just enjoy the movie. You can probably tell that I am from the generation of watching horror on tv while growing up. It was a fun time while it lasted, here's hoping the horror hosts stay on tv in some way, shape or form.

Svengoolie is still going strong and he's nationwide, if you want a great, old style horror host, check him out. This is the old "Son of Svengoolie" from the late 70s, renamed now to just Svengoolie (Rich Koz.) He's got a internet presence everywhere, and you can pretty much catch his Saturday night show anywhere.

One thing that's interesting is how risque the original svengoolie (Jerry Bishop, 70-73.) That was back when his show was mostly watched by college kids usually stoned out of their minds. There's a great youtube clip with him having Tempest Storm -- yes, Tempest Storm -- introduce a movie!

When I was a kid in the 70's we had two horror hosts on two different channels, Chiller on channel 30, and Creature Feature on channel 11 (I think, could be the other way around.) I don't really remember the hosts being anything other than normal looking dudes tho, but they showed the usual rad Universal and b-flick horror and sci fi stuff... it was a fun time to be a kid and discover that stuff. I'd go through the TV Guides with a magic marker every week and circle everything I wanted to watch. If I was lucky I actually was able to stay awake long enough to see the end of something too!

So I did a little more STL horror host research and found out we also had a show called Simon's Sanctorum hosted by a guy named Gary Newton, this aired between 1970 and '73, and though I was born in '68 this was probably a bit before my time, as I barely remember anything under the age of 7. Also it says this show aired Sunday afternoons around 2pm.

Anyone else from STL interested in learning more, click the link below and scroll about half way down to SIMON: