I recently discovered a nearby auction house that I never knew existed here in Jeffco, and strolling by was pleased to see that they also just sell stuff outright like a regular resale shop, (I suppose saving the bigger / better items for the actual "Auction Night" which the proprietor seemed in the midst of preparing for.) Anyway, the first thing that caught my eye was a set of tall, frosted antique car drinking glasses, that I was told were originally sold at Federal gas stations back in the day, or given away when you filled-up and spent a certain amount of money. I got them ALL for $5. Researching online after arriving home, I discovered I got a pretty good deal on them, but also realized I got a couple of doubles too... still cool none the less. Found a few other little vintage odds and ends (for the cover art and graphics of course!), and also spotted a super cute child's booster chair featuring a sunny example of late 60's / early 70's illustration and color combinations. This I did not buy as my son is now fortunately 11. 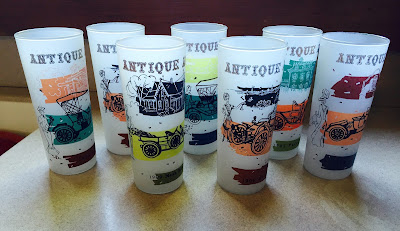 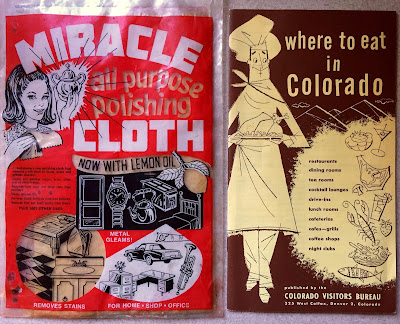 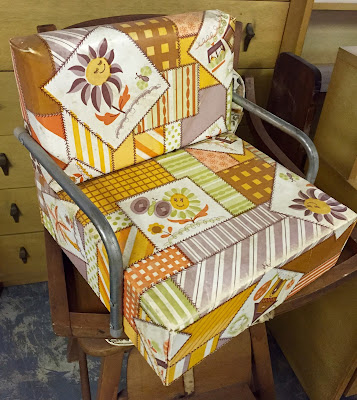 Nice finds. I can never pass up vintage packaging graphics either. Hmmm... Where exactly is this auction house in Jefferson County?

Man, yesterday at the Friends of the Arlington Library book sale in Virginia they had a antique 1950s Clue board game with at least most of its stuff intact. I didn't spread the whole thing out to look it over, but lots of the little metal pieces were rattling around in there, decks of cards, etc. The board and the outside of the box were in pretty good shape, too. Five bucks. But there was no way I could get it back to SE DC in the Metro along with all the damn books we were also buying. Those original fifties game boxes are, like, eighteen by twenty-four.

Next spring I'll be able to take the car there. The tables will be turned.

Auction house is in House Springs, Tom... don't expect too much, though!

Yeah I love the art on that old CLUE game! Carol was recently showing me an old Nancy Drew board game with outstanding box lid art that I had somehow never seen before! I'm on the hunt for one of those now myself.