Pussy Meow was a toy made by REMCO in 1966. She's the loveable kitty friend to a poodle named TV Jones, and each stand about 9-inches tall with movable legs and rooted hair. They also feature "magic buttons" on their chests that when pushed make their heads slightly turn. They're packaged in neato plastic red / blue and pink / blue television shaped cases, and apparently extra carded outfits and assessories were available (find out more HERE!) I picked this up at a toy show last year, and even though I'm a dude and this is obviously a girl toy, I love her just the same as my monsters and Shogun Warriors. 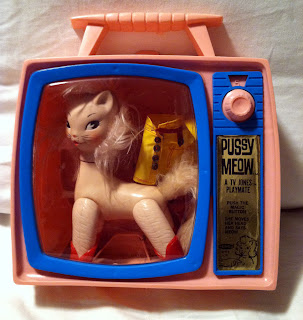 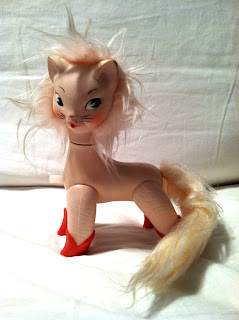 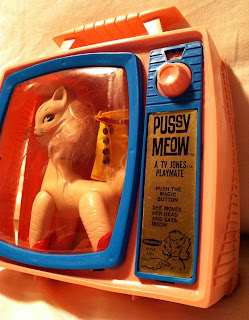 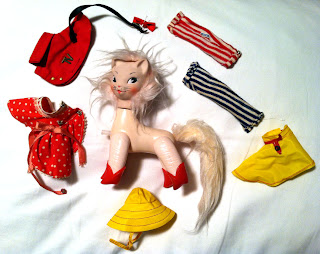 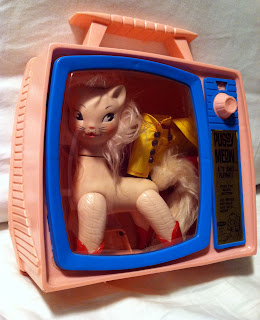 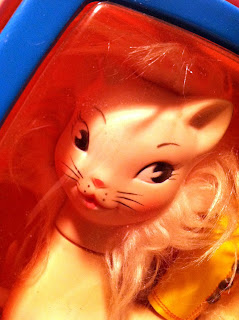 This makes me feel wrong, but I'M LOVING IT!

I like those bright red cowboy socks, but nothing beats the TV case. How very cool. I'd have played with that all day long when I was a kid.

>This makes me feel wrong, but I'M LOVING IT!

You know you want one, Mykal!

You want one too, Maura!

>I'd have played with that all day long when I was a kid.

I used to own TV Jones back in the '60s. I got him strictly for the very cool TV set case.

The person I got this Pussy from (hee) also had a TV Jones, but I didn't have enough money for the pair unfortunately.

It is the ancestor of My Little Pony minus the cartoon (too bad since it came with its own TV.

Plus that magic button really works your trigger finger out.

>It is the ancestor of My Little Pony minus the cartoon

You know it's something special when a cat is the ancestor of a pony!

>Plus that magic button really works your trigger finger out.

I keep pushing it and the head definitely turns, but I can't for the life of me get her to meow.

An insane toy to be offered in any time-frame.

I was a kid during this period and don't recall hearing of this toy product at all.

An insane toy to be offered in any time-frame.