The rumors are true! Mr. Karswell has left the building and entered— The Asylum! Asylum Press that is, and beginning this October, Karswell’s The Horrors of it All returns just in time for Halloween with a petrifying plague of monthly precode era, comic book reprint one-shots-- and we’re kicking it off with a volume of vampiric terror, the likes of which hasn’t been seen since, —well, since the 1950’s! So flap your batty lil wings and shriek on over to the frightmarish new Facebook page HERE! to learn about upcoming releases, as well as all things THOIA! Join our terror team NOW— and don’t forget to tell your friends too! You can even already pre-order VAMPIRES #1 HERE!, as well as a spooky cool variant cover version by my rad pal, Frank Forte HERE! I've been dying to tell you guys the news, and now it's official! And of course, because it's Friday, it's time for some frights! So let's get ourselves into a broody vampire mood with a bloodsucker classic from the October 1954 issue of Mystery Tales #22, with art by the always amazing Joe Maneely! And sorry folks, this story will NOT be in VAMPIRES#1! 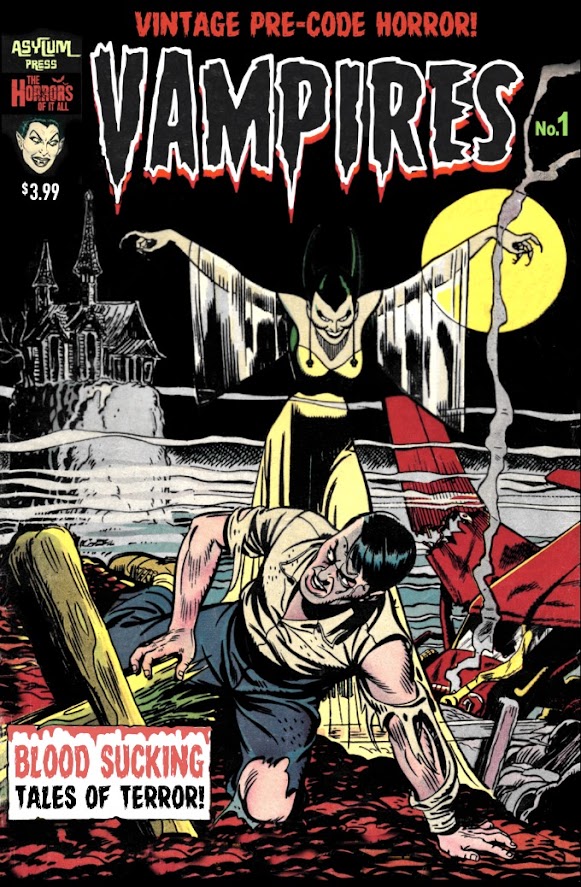 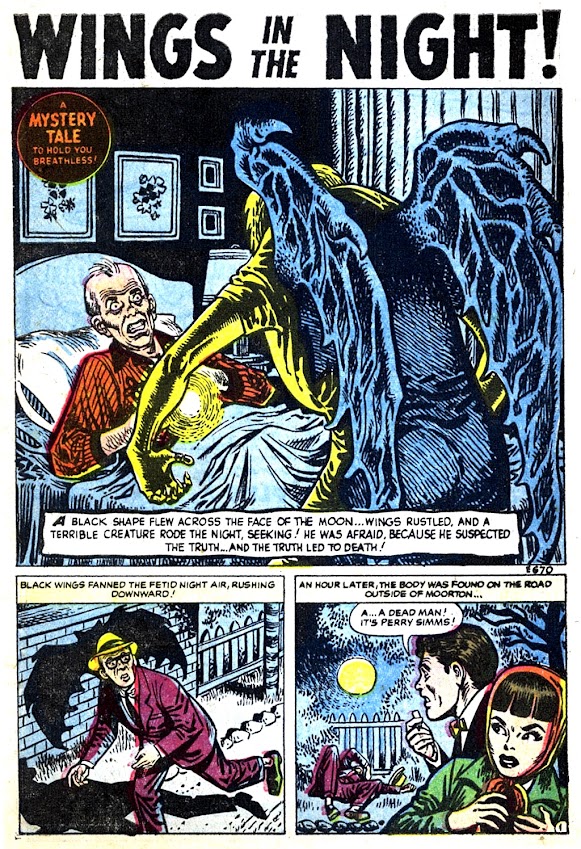 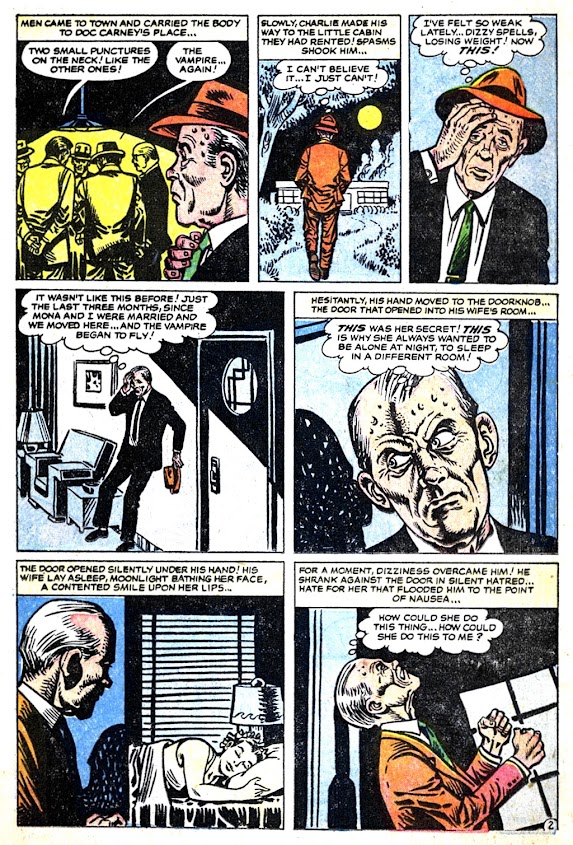 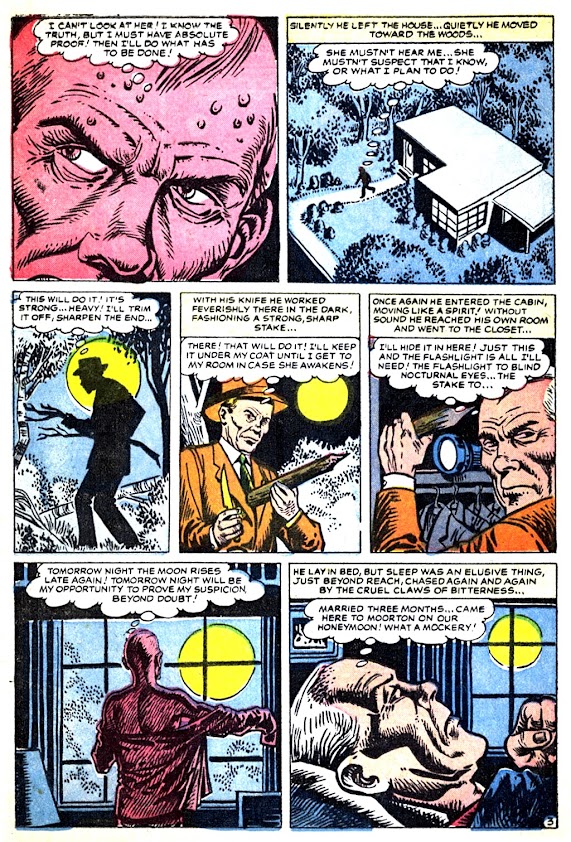 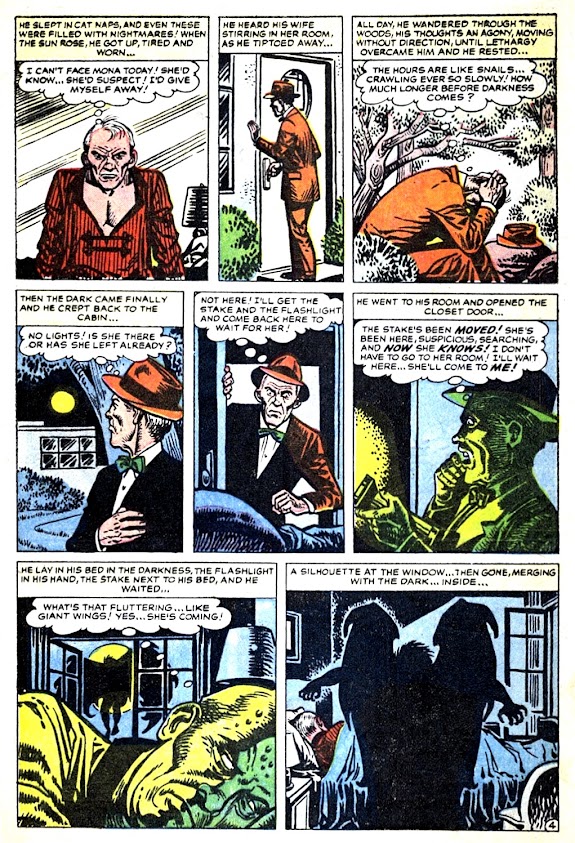 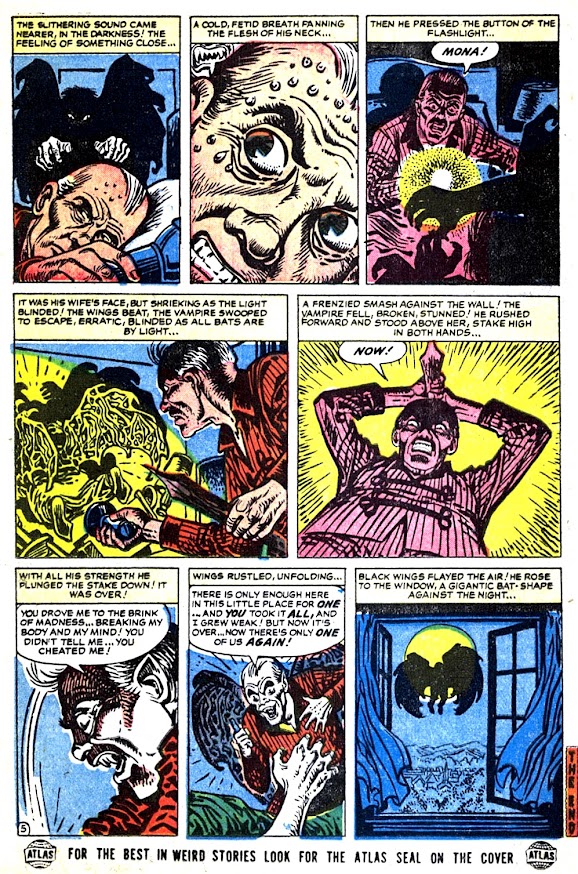 Having read this story before, I knew how it was going to go down. Once you know the twist, it reads quite differently. I do love that we never fully see Mona's vampire form, but the panels that reveal parts of it are loads of fun, such as the last panel on page 4 and the first one on page 5--with only Mona's eyes and hands truly visible in the shadows.Panels 4 and 5 with the flashlight and Charlie going in for the kill are awesome. I just wonder if Mona ever knew that Charlie was also a vampire. Probably not.

Congrats on the release of your book. Hard to choose between the two covers.

Maneely's `Wings in the Night' art looks like a three-way hybrid of a less streamlined Johnny Craig; Bill Everett and another Mad artist my old brain can't
quite recall. Love the first panel. The veins of the wings alone are worth the dime.

Does anyone agree that the unfortunate Perry Simms resembles Don Knotts in 'The Ghost & Mr. Chicken'?

Lot to like in this one. Didn't guess the ending; I was really caught up in Charlie being a vampire and so they tricked me with them both being vampires ... which is good, because Stan had a way of starting out half the stories with "if you can guess the ending of this one!" Well, I couldn't!

And, obviously, Maneely turns in another wonderful work. The veined wings are a great image, and Charlie's expressions all read so well. The last page contains a great set of action and pacing. I always love to see Maneely's work.

Congrats on the book, Karswell!

Yeah, that last page is a showstopper. I quite like page one too--especially the second panel, with Perry Simms cringing under the shadow of Mona's leathery wings. Story-wise, I love the prosaic churlishness of Charlie's motivation: "Man, what a jerk I was to let her trick me into marrying another vampire. Some honeymoon. What a joke." It's easy to imagine him muttering like Popeye as he whittles his stake.

I like cover A of Vampires a bunch. Who was the artist? I'm terrible at figuring stuff like this out on my own.

Hey thanks for the great comments and I'm certainly just as excited as some of you about the upcoming VAMPIRES release! And yes, I will have copies available directly from me once it's out, so if you're having trouble finding either version upon its initial release, be sure to contact me and I will do my best to hook you up! Also, John Celardo is the cover artist for VAMPIRES #1... this cover originally appeared on the Novemnber 1952 issue of The Unseen #7! MORE INFO HERE: https://www.comics.org/issue/306542/