I'm a fan of just about everything related to John Campbell's 1938 sci-fi horror novella classic, Who Goes There? aka The Thing from Another World. And both versions of the film from 1951 and 1982 are equally tremendous to me as well, so it was with jaw dropping excitement that I fist pumped the air and shouted "Yessss!" to myself when I stumbled upon this RCA SelectaVision VideoDisc copy of the Howard Hawk's version yesterday, which features some wildly unique, crazy AF cover art that was completely new to my eyes. Okay, I don't own a Video Disc player (it's kind of like a laser disc player but played on a machine more like a record player with a needle instead of laser beam-- errrr, I think) --but anyway, I never had any intention of playing it as I already have both the VHS and DVD, and this was mainly something else awesome to add to my Thing collection. So, anybody out there wanna tell us all about Video Discs? 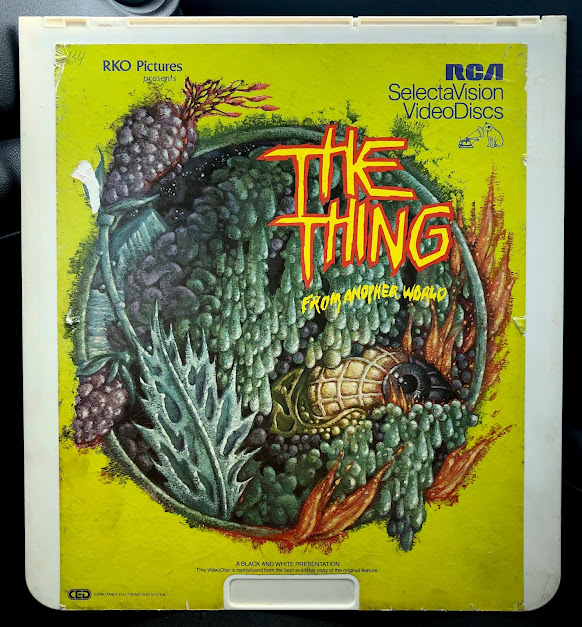 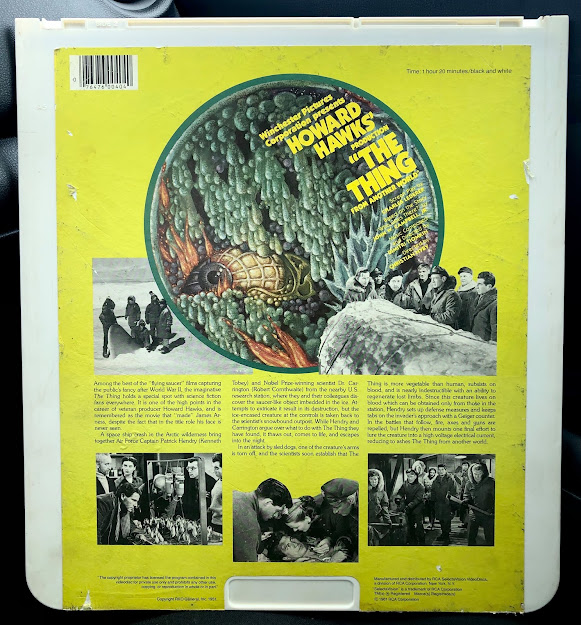 Yes, these were analog discs like vinyl audio records. They were read by a needle, just like a record player, except that video and sound data were read instead of just sound. That's the limit of my understanding of how it really worked.

I never had a player, but I rented them a couple of times in those days before VHS really caught on. Like you, though, I have a few CED Videodiscs for King Kong (1933), King Kong (1976), and Planet of the Apes.

I should have also mentioned that the system was called CED (Capacitance Electronice Disc). It was developed by RCA, but RCA used the name "SelectaVision VideoDiscs." Others used "CED VideoDisc" or just "VideoDisc."

It's essentially an early laser disk and the comments about capture a lot of it, just one thing not mentioned, the whole sleeve condom thing was to protect the disk from fingerprints and other humnan gunk when loading and unloading from the player. Otherwise pretty much an early CLV laserdisk

CEDs were one more instance of good idea-bad execution-stiff competition that led to its decline.

It's interesting how little info there seems to be online about CED VideoDiscs. I mean, even deep into usually pretty reliable video tech forums, all I was able to find was Wiki copy pasta. I was searching to find resolutions examples in screen-cap comparisons between the notable formats (VHS, BETA, CED, LD, DVD, HD DVD, Blu-ray, and 4K UHD). I can find plenty of these for LaserDisc and video cassette comparisons with later formats, but not for CEDs. And that feels weird. I know they didn't really catch on, but some nerd out there somewhere has to be cataloging this stuff for posterity.

The dry specs indicate that the resolution between the stylus-read CED VideoDiscs and VHS were pretty similar: 240 lines of (interlaced?) resolution compared to 425 or so delivered via LaserDisc (and 500 for the DVD). Add to that the fact that CEDs could scratch, skip, and jam up inside their cartridges, and the tech was destined for certain failure.

Like 8-Tracks though, the product design could really rock. I remember looking through display bins at the store when I was a kid (I think Sears sold SpectraVision?), but I never bought one. The art on this example is stellar. I've never seen it before in my life either. Thanks cataloging it for posterity!

What always goes through my mind when viewing this film is that James Arness -- Matt Dillon from Gunsmoke! -- is the monster! You'd never know it under all that make-up, but when I first heard that as a kid I could never not think it every time he lumbers unto the scene!

I am exactly the same way, but reversed. Every time I watch GUNSMOKE I think "holy mother of god! Run everybody! Run! He's got you all fooled! That Thing will assimilate all of Dodge City just like he did your Marshall!" I figure he's already Thinged everybody but Chester by the end of season one.

Q:Last movie ever on videodisc?
A:"Back To The Future".
- rm