Found this really neat Donkey Kong Penny Bank produced in the early 80's, aka the golden era of the awesome arcade boom. Donkey Kong was one of my all time favorite games in my younger days, still is actually, and I can't even begin to tell you how many times I rode my bike 3 miles to the Johnnies Ice Creamery in Oakville MO (where I was not only introduced to DK and Mario for the first time, but also the fantastic cocktail design stylings of table top arcade games), --that machine seriously gobbled up all of my weekly kid allowance-- faster than Pac Man gobbles up dots! The sturdy, cardboard and plastic penny bank on the other hand gobbles up pennies quite differently, but at the same time is a wonderfully interesting spin on the actual game play of the arcade classic: You place your penny at the very top of the girders (underneath Kong's foot) and the coin descends down, not rolling like the barrels that Kong hurls at you in the game-- but FLIPPING end over end! Sort of similar to the way some people can roll coins over their knuckles. You even get to jump Mario over the penny as it passes under him by pushing down on a lever on the right side - (see video below!) 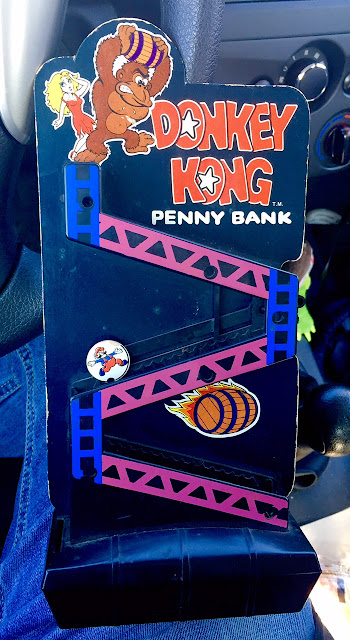 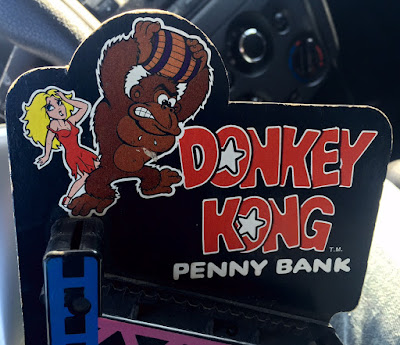 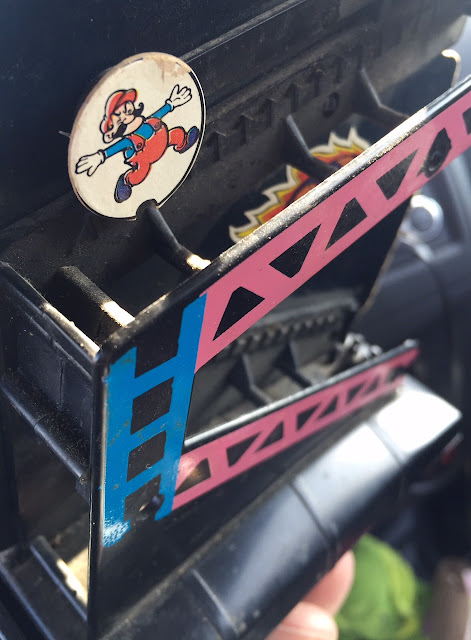 So what's your high score?

This is so neat. Really, no game lends itself to this design the way Donkey Kong does. Although, for what it's worth, you could probably capture my usual Q-Bert efforts in a similar fashion: start at the top and hop down till you fall right off. Repeat. At least I'd be saving money for a change.

Save them pennies! DK style!

Indeed... I was trying to think of another classic video game where this descending penny concept would even work, but can't come up with anything. Hell, this idea only works on this level of DK as well, it certainly doesn't translate to the pie factory or elevator levels