Who thought the Girls of Montgomery Ward '71 posts were over? Who? Who?? Okay, one more at least, and we'll save some other highlights for later this year around swimsuit season, sound good? But for now let's take a look at this incredible section of cartoon themed girl's clothes. And let me also state that there isn't a single cartoon themed anything in the boy's clothing section of this catalog, so yes, this is a rather unique collection. But why unique, you ask? I guess mainly because I don't recall a single girl that would've been caught dead watching Popeye when I was a kid in the 70's. Josie and the Pussycats, yes. Crusty old seafarers endlessly fighting over a squeaky noodle in a dress? No. These days of course it's much different because everyone loves Popeye, --and I seriously doubt (past, present, or future) that I would ever even consider talking to a girl that doesn't insist upon making cartoons a major part of her balanced daily life-- including Popeye! So here we are, and there she be with Popeye on her back pants pockets. In high school and in 1971 you were probably already glancing in that general direction of her body anyway as she waltzed on by, but suddenly, somehow, the view gets even better because-- Blow me down! --there's Popeye doubly punching a can of spinach into the air too! Now if you keep turning the catalog pages you find that Cool Cat also became a fun fashion statement, available not only on a shirt (that looks more like a nightie) but it also came with a matching bikini, unfortunately NOT pictured in the catalog. Even the Road Runner *meep! meep! gets his own tee shirt, --complete with ribbed neck for her errr... comfort. So what happened with the boys clothes in this catalog, you ponder? Stripes. And sports. That's what happened. Zzzzzz. 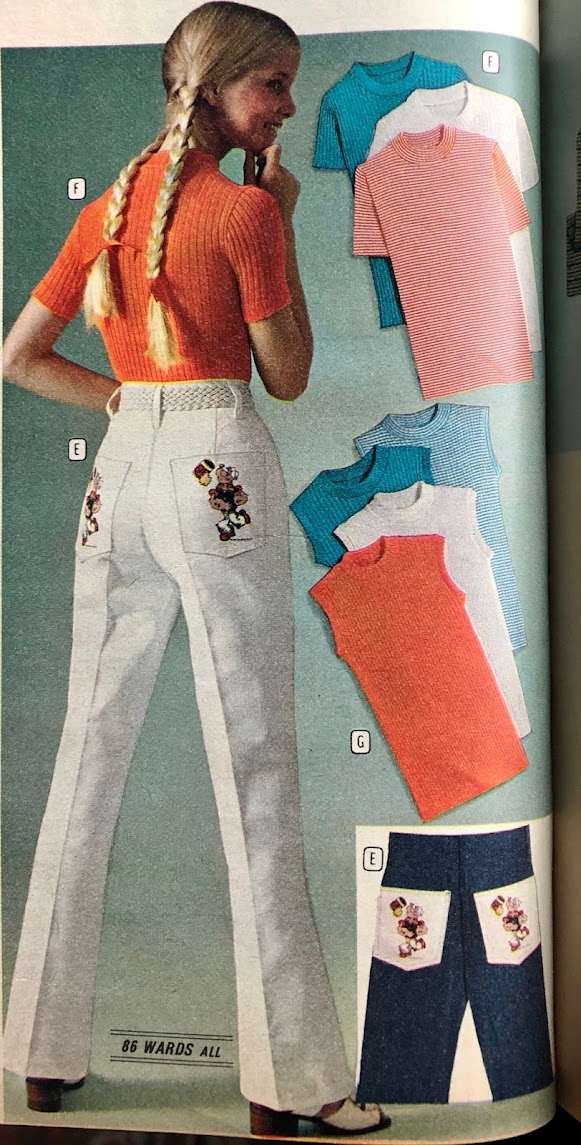 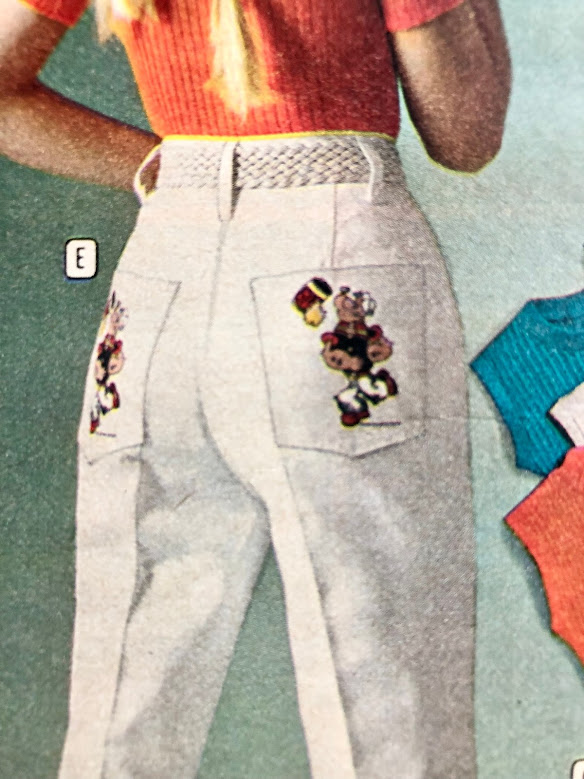 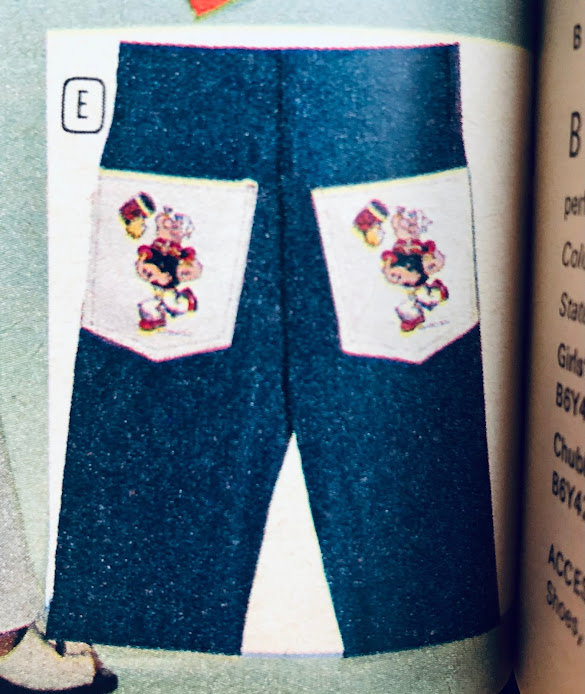 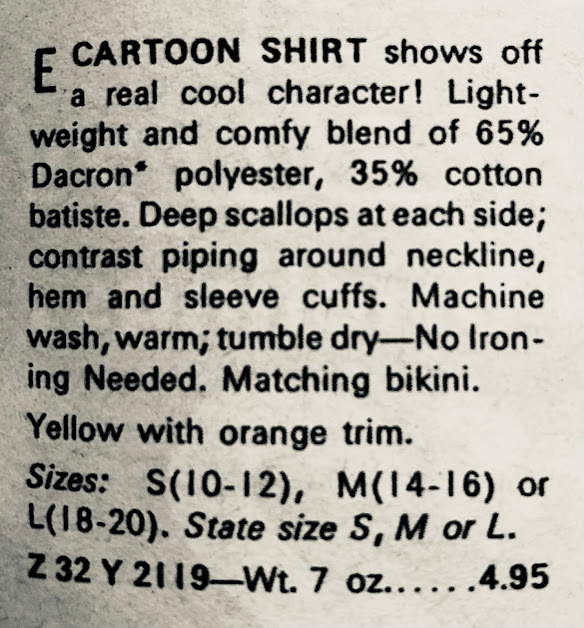 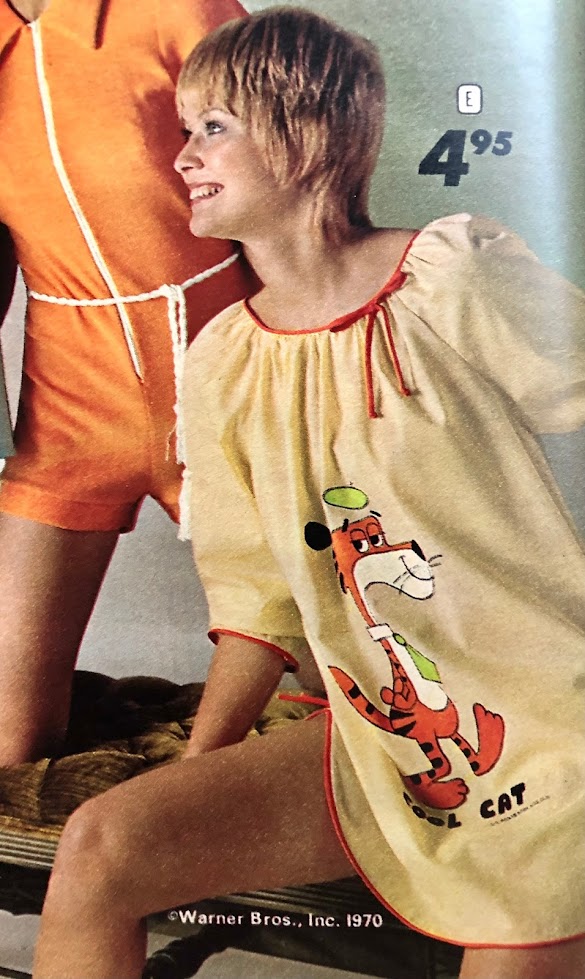 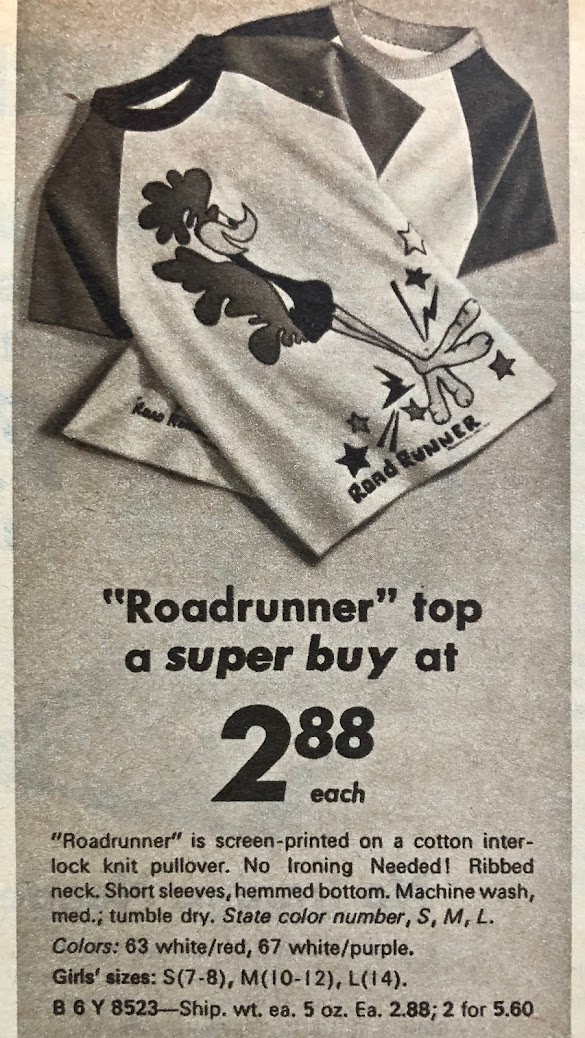 I had completely forgotten about cool cat, I had to go to YouTube to remember:

Larry Storch did the voices! Reminds me a lot of Cool McCool, very very late 60s. Any wonder that shows up with a Cool Cat shirt is a keeper!

This makes sense. A girl's rump has the same effect on a teen boy as spinach does on Popeye.

Agree on the rump comment, whether a teen boy or a fully grown adult though, —some views never get old.

And yes, Cool Cat rules, that’s one character certainly deserving of a comeback.
Thanks for the comments

I guess this was around the time of the bizarre Popeye reboot, when he was suddenly living in suburbia? Those are surreal.

Dude, I watched Popeye! I watched pretty much any cartoon in the 70s, but got real picky in the 80s. I wouldn't have worn Popeye pants though. I would have def worn Cool Cat merch though