Friday Frights takes yet another wild 'n weird turn this time around, and heads into the furthest reaches of space --and the imagination! And it's not so much "frightening" this week as it's more about finding something interesting as well as different, though still maintaining the good 'ol twist endings and top notch artwork. And it doesn't get much better than mean Gene Colan and fantastic Frank Brunner stories, along with some of the coolest painted cover art ever from killer Kelly Freas (those aliens are definitely worthy of a Friday Frights post), PLUS joltin' Joe Romita, and bad ass Boada! So, does anyone remember this great, but short lived, black and white adult magazine series from Marvel / Curtis? If not, here's your rockin' reminder. First story is from the September 1975 issue of Unknown Worlds of Science Fiction #5, followed by our second hilariously sexy feature from the January 1975 debut issue, aka #1! 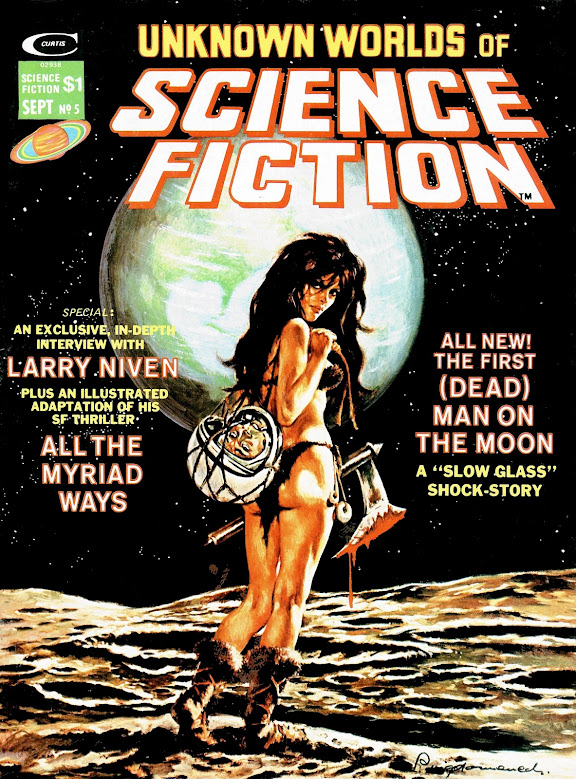 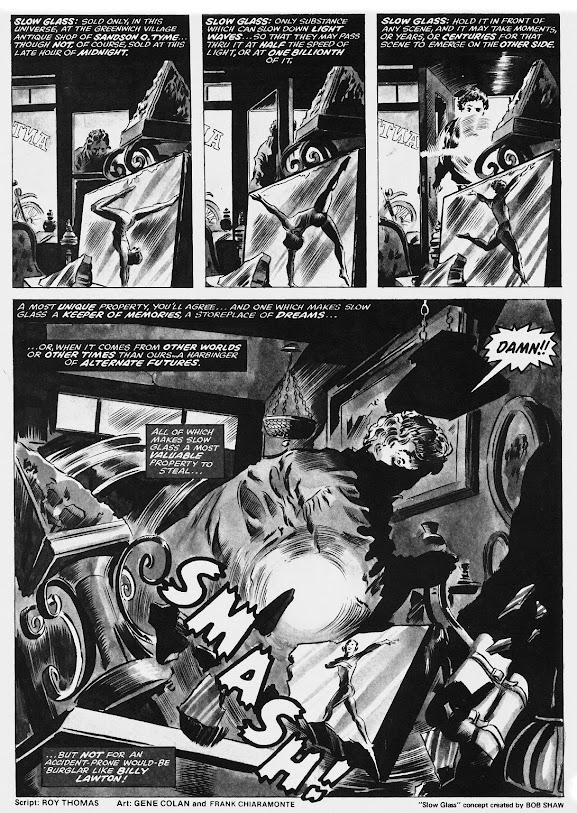 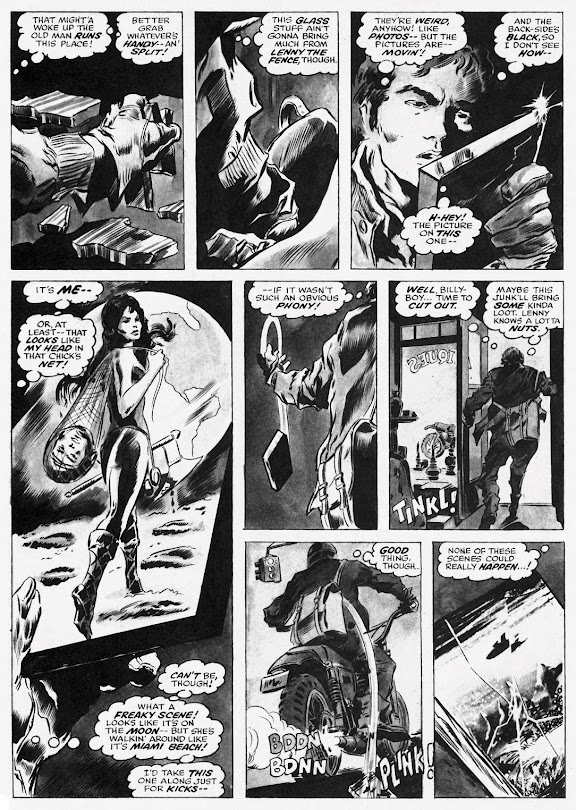 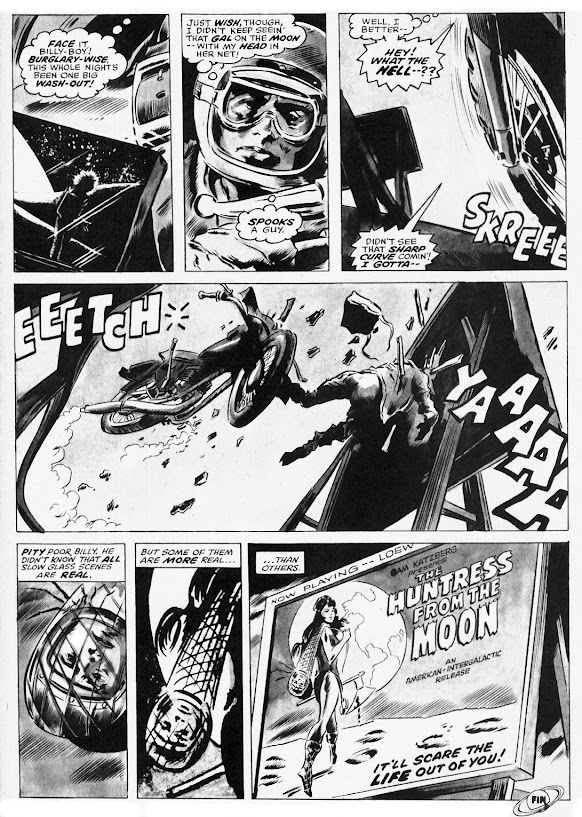 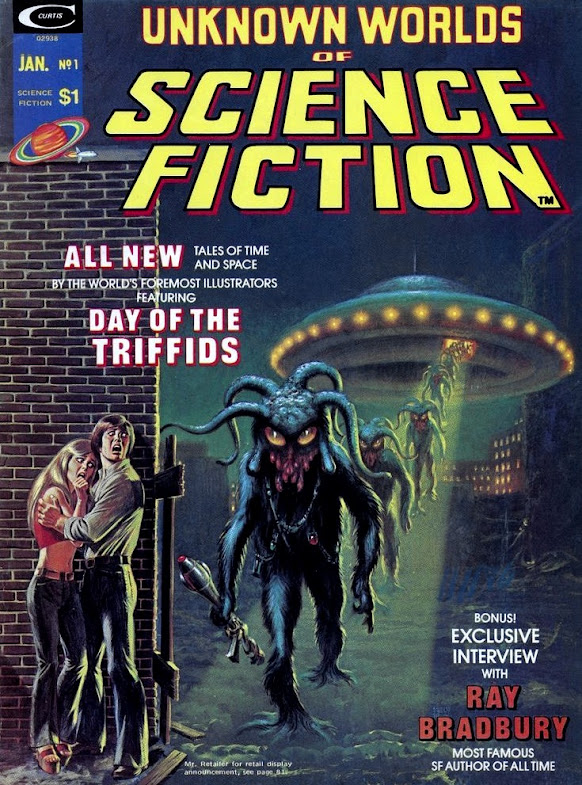 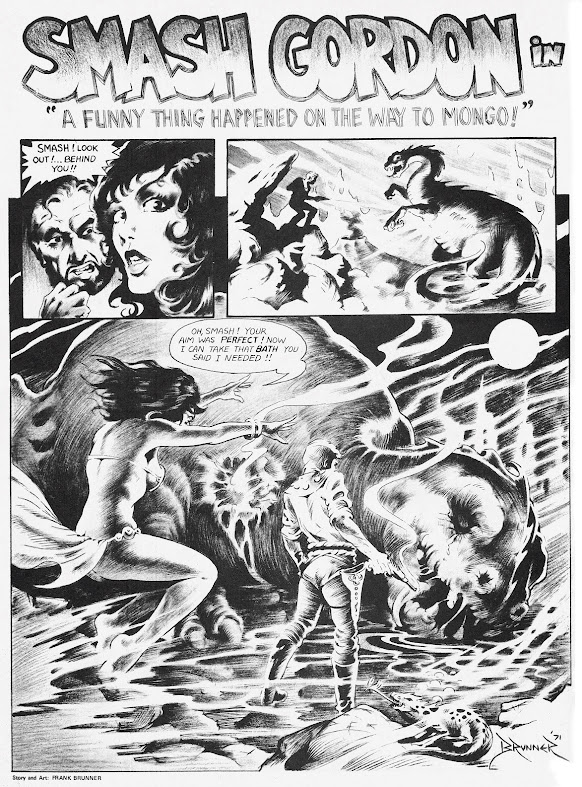 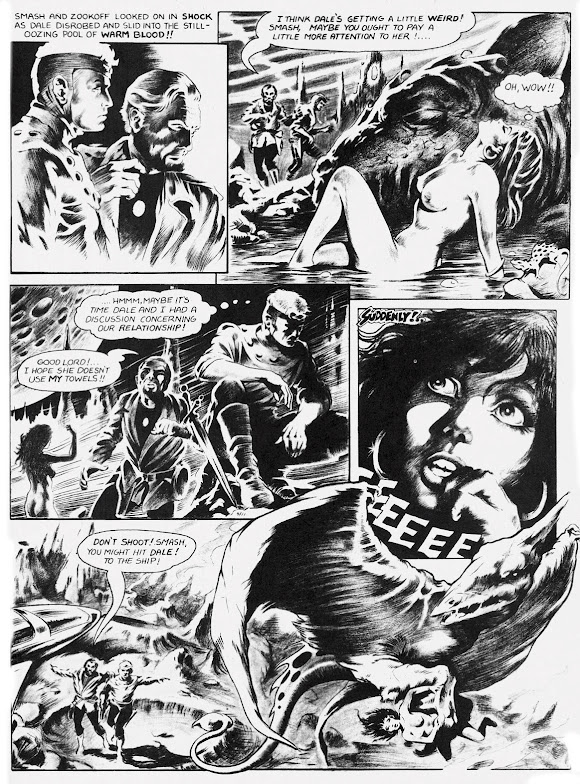 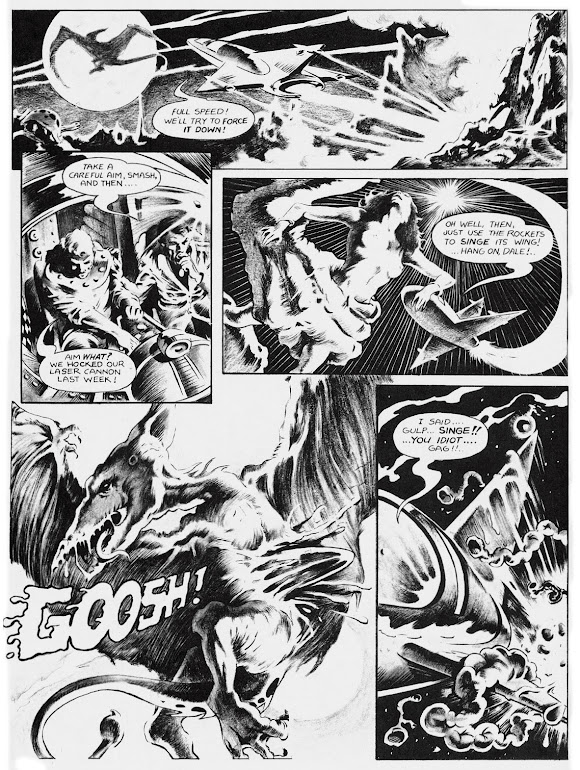 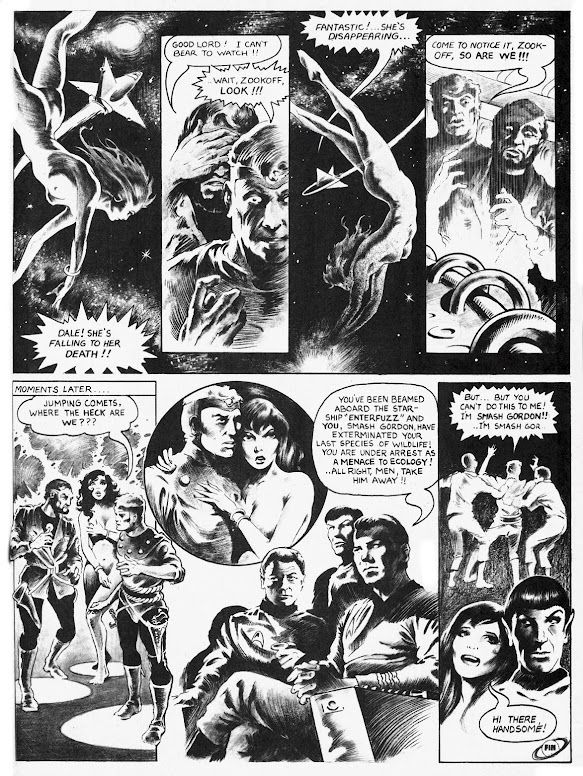 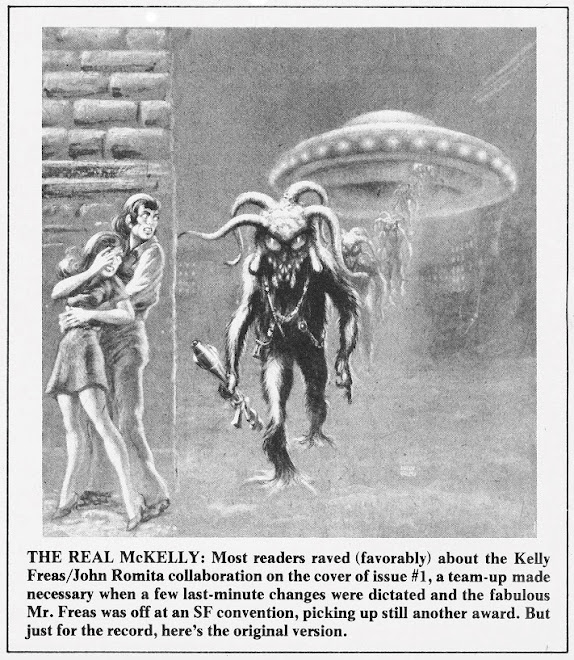 These magazines were Marvel's answers to the B&W magazines of the day (I especially liked the horror ones but, IMHO, Epic was the best of the bunch.) The guy behind Skywald always complain that Marvel pushed him out of the market by flooding the market with books like this.

Like Atlas stuff was an answer to EC, but with tongue-in-cheek a lot of the time, this stuff had the same feel and was usually a pretty good read.

The Colan art is good, though he's not given enough to draw in the story, but the motorcycle crash is fantastic.

The Brunner art? Incredible. Every panel is just gorgeous. The background at the top of page 4 (and the layout) is excellent and reads really well. If you notice, the woman switches sides and the men reverse in each panel. That's some fine work.

I remember having that first issue of Marvel's b/w science fiction title. The concept of slow glass was mind blowing to me as a teenager then, and was a genius concept to use to tie the various stories together. I hope to eventually find copies of the old Marvel b/w issues I used to have.


Gene Colan! The most cinematic comic artist of all time. The guy he was paired with on this did not do him justice. Dig up Tomb Of Dracula to watch his 32 page movies.

Marvel's b&w mags were a bit pricey for me as a poor tyke. One could get four comics off the grocery spinner rack for a buck. Still, I bought select issues like the Chariots of the Gods tie-in and Doc Savage.

The cover immediately reminded me of an Italian B movie,...and it was! Alternate title: Major Tom vs the Savage Bambolinas d'Luna.

Nice! I actually kind of love the Colan / Chiaramonte collaboration here. It's not as stylistically locked-in as Gene's stuff usually is, has a little more breathing room. I also dig that dig at Sam Katzman and AIP. The Huntress from the Moon needs a fancy Blu-ray release of the new 2k remaster.

Gotta agree about Frank Brunner's stuff here. Wow! Way to go satirizing Williamson aping Raymond--without really having to look like either (spotted alien lizard for scale). The towel joke made me LOL.

I'm a little mystified by the editorial changes in the Frank Kelly Freas cover. I mean, I get why they wanted Romita to update the old-fashioned teens (though I like the originals better, sorry Joltin' John), but why add that broken fence?

I think it's neat that this was Marvel's sort-of sci-fi answer to Warren (I guess?), but it looks for all the world like they were predicting Métal hurlant instead--a full month before that mag debuted in France. I feel like Epic Illustrated gets a lot of crap for ripping Heavy Metal off three years into its run. But then there's this evidence that Marvel was heading that way all along.