A headless ghost in a haunted house, --and a Dracula cameo too! Wait a sec, has Friday Frights landed one day early, you ponder? Nope, just some nifty 50's comic book fun, when Timely / Atlas took a stab at doing the Torchy thing and occasionally came up aces. Hedy is a leggy blonde actress / model who's lookin' to score big in Tinseltown, even if it means taking on roles in a scary setting! Meanwhile, her fellow acting nemesis / redhead, Sandra, is always looking for a competitive gig with a bigger and better bite-- and this time she's definitely found it! The first story is from the August 1948 issue of Hedy De Vine Comics #28, while the hilarious back-up feature can be found in the May 1952 issue of Hedy of Hollywood #48, and yep, it's penned by 'ol Stan the Man himself. And never fear, a Friday Fright post is also on the way tomorrow too! 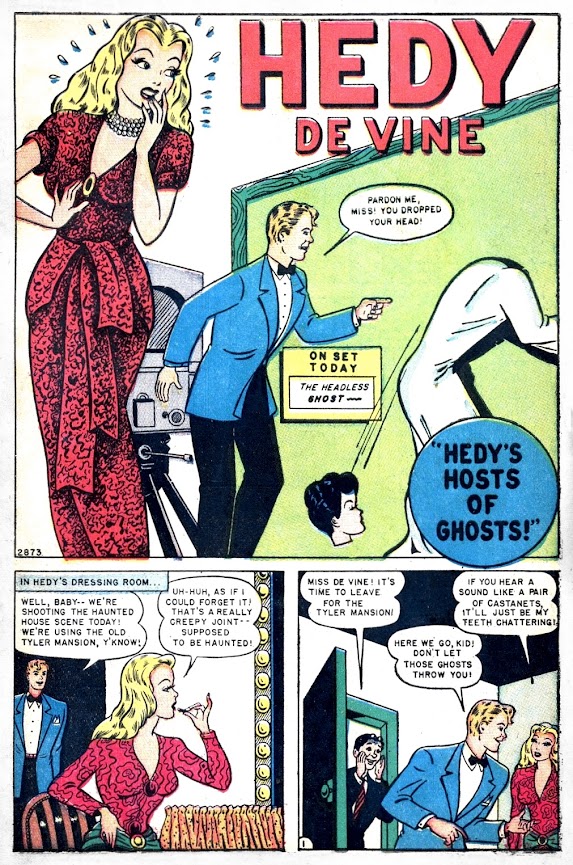 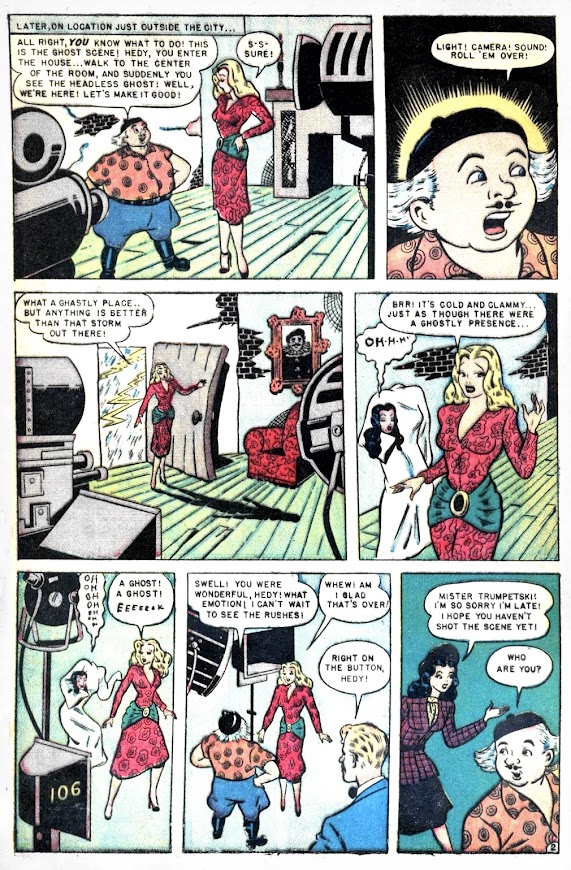 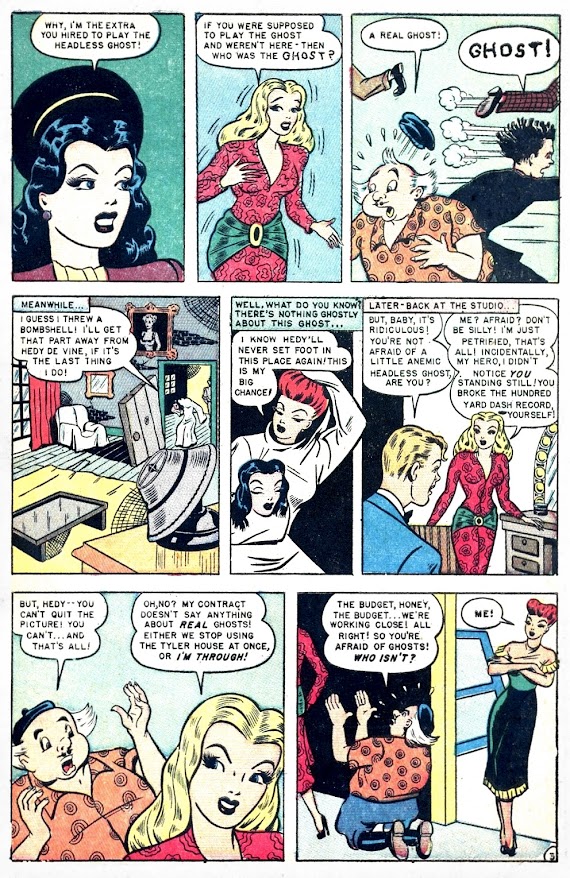 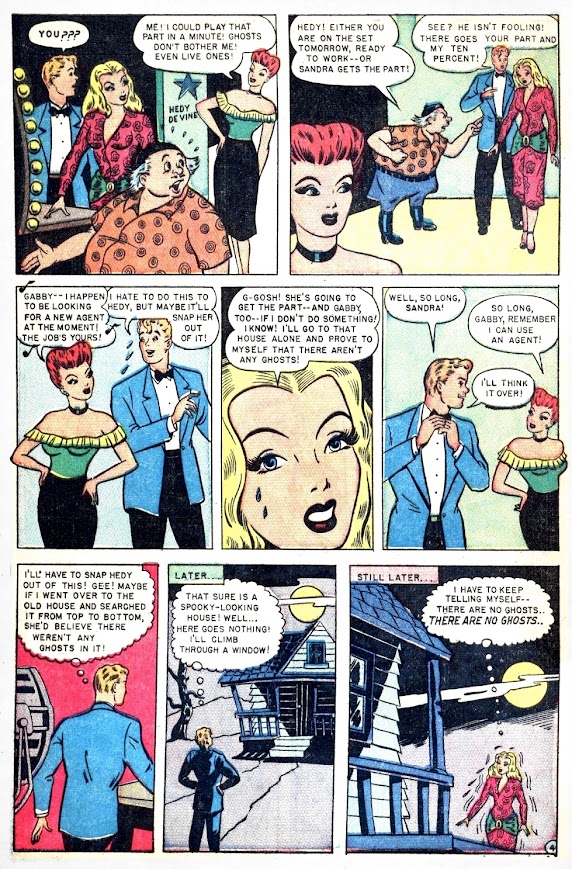 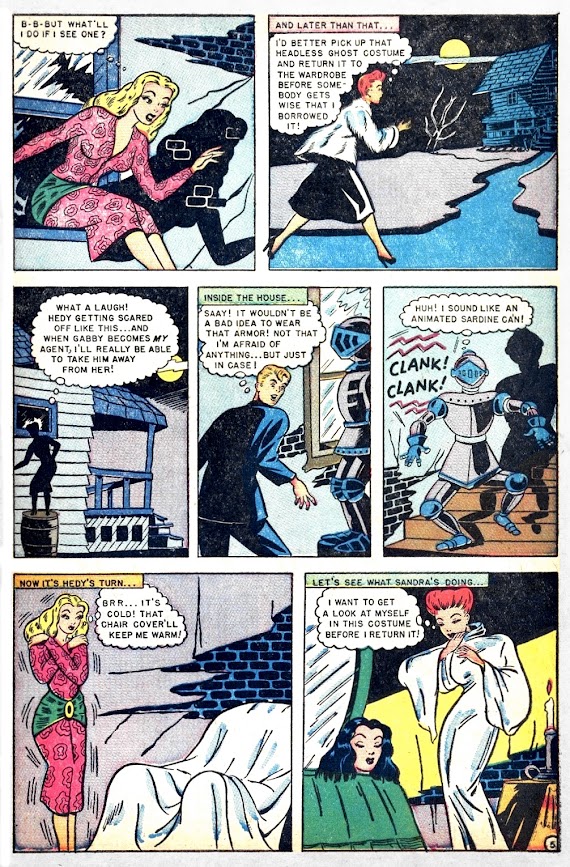 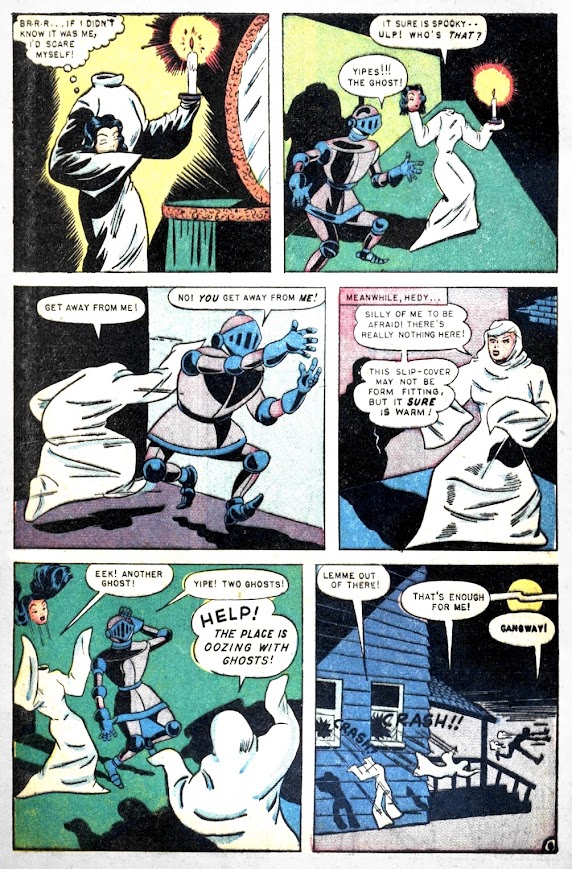 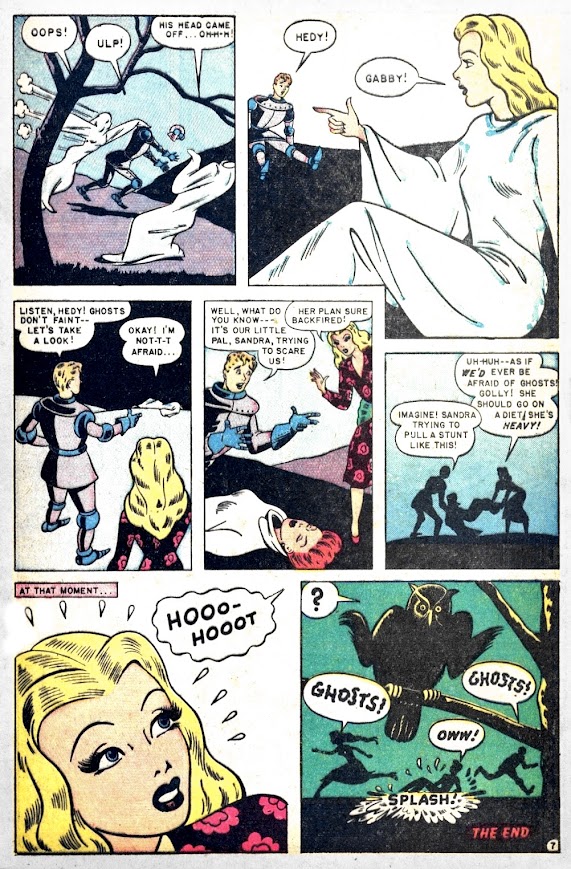 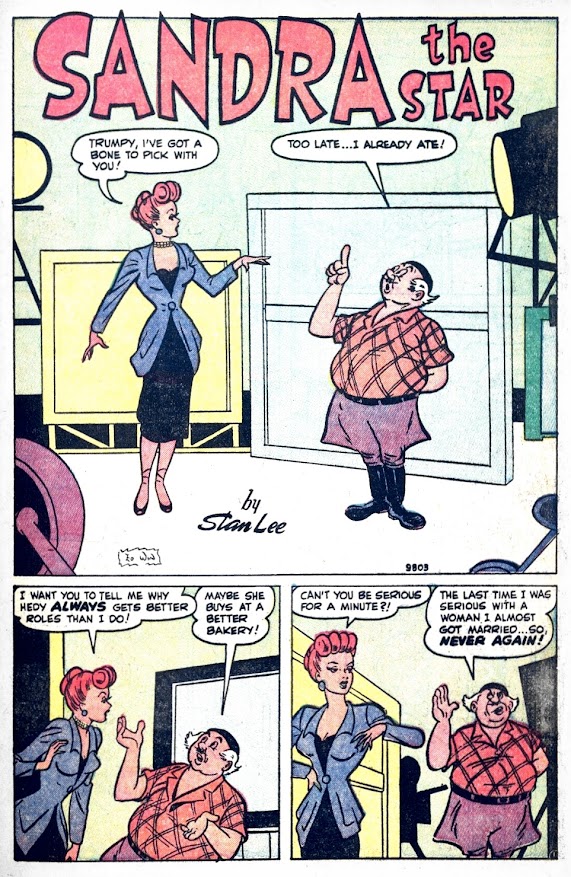 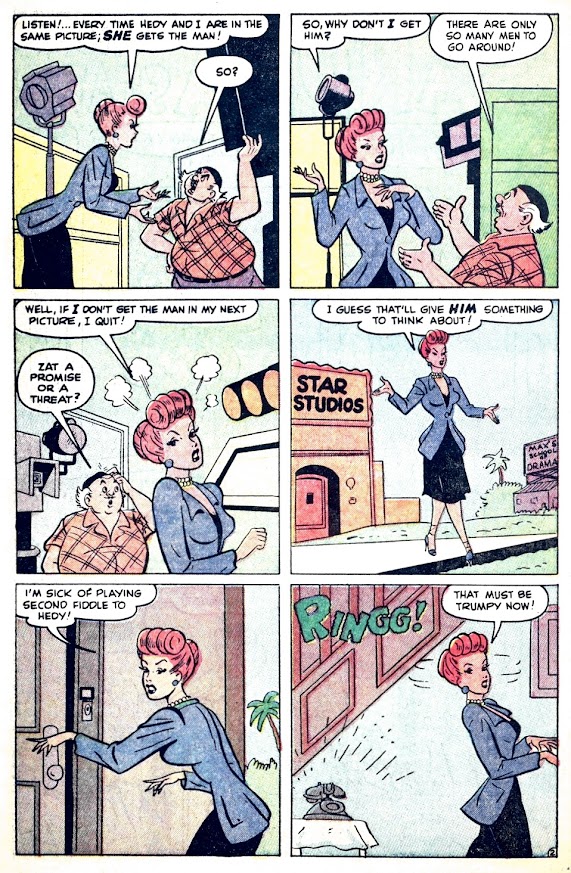 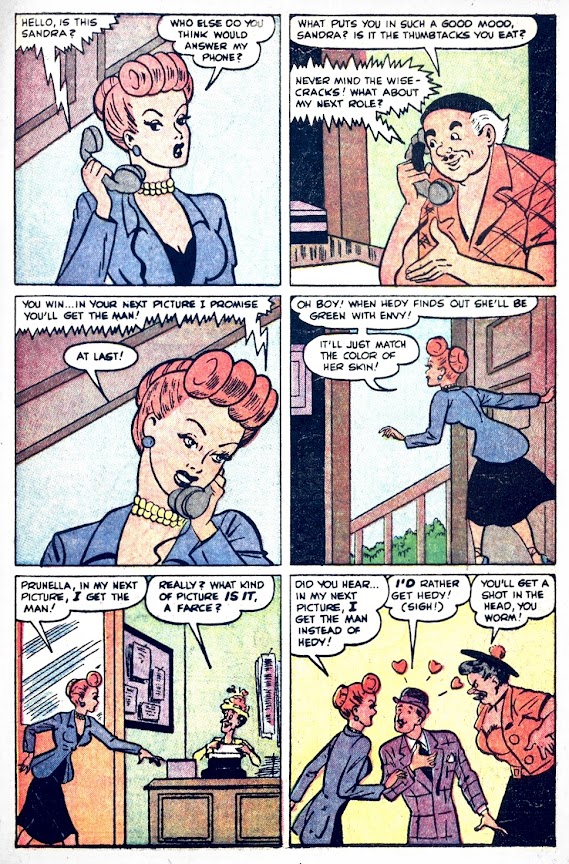 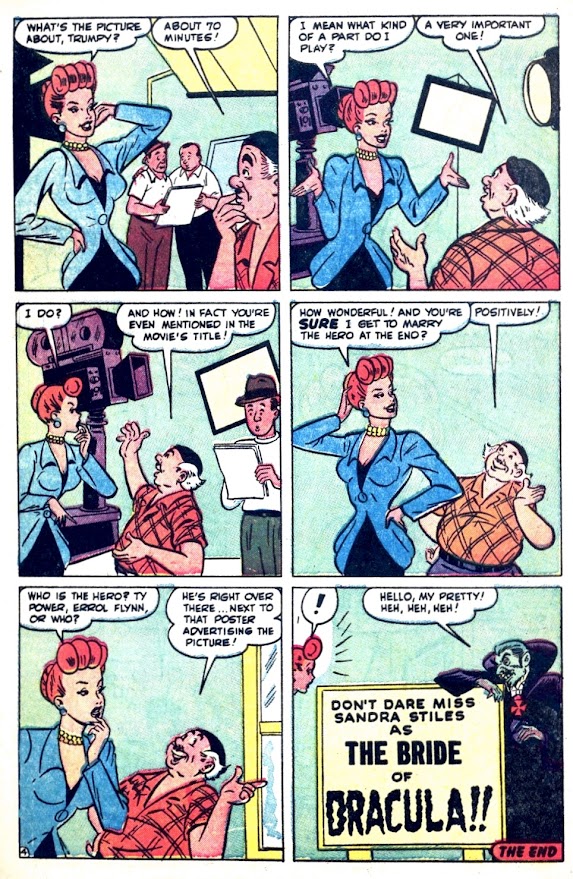 Wait..they were only pretending the house was haunted, but then...? That's brilliant!How has nobody else ever used that premise?
I guess, then, I shouldn't be surprised that the director is wearing jodhpurs & a beret... ;)

Wanted to look at GCD to see who the artist was, looks like a lesser version of Everett in the faces, at least, but nothing listed -- but Kurtzman was doing gag strips in that issue (pre EC.)

That's one convincing headless ghost costume! Love the panel with the knight and the ghost running away, has real comic energy.

And, spoilers, you ruined the joke in the second strip with your bite comment! :)

Sandra, what is there to complain about? Bride of Dracula -- sounds like a dream role to me!!

>Wait..they were only pretending the house was haunted

It's clearly haunted, I mean, just look at those blue color overlays on the exterior, plus the bad interior wallpaper upkeep!

>you ruined the joke in the second strip with your bite comment!

No, I ruined the joke with my mention of a Dracula cameo in the first sentence! Come on, man-- keep up! ;)

>Bride of Dracula -- sounds like a dream role to me!!

Haha, sink your teeth into that one, Mr. Tod Browning!

Thanks for the comments, and yes, as promised, an actual Friday Frights post is coming up a little later today-- stay tombed (of Dracula!)

I'd say that house is cursed! Sometimes it's just a board and batten bungalow--with an attic dormer--and at other times it's a full two-story log cabin. It goes back and forth like a damn accordion; that moaning you hear is officially music. Careful of the stairway: Depending on when you go in the window, you may get stretched or squeezed between floors.