Friday Frights time again, and correct me if I'm wrong, but have I ever posted any underground horror comics here? I can't remember either, so here's a good 'n gruesome one for ya from the May 1972 "Lovecraft" special issue of Skull #4, featuring the jolting art of Jack "Jaxon" Jackson (he also created the creepy cover art.) Seems like every time I turn around there's something new in film, tv series, comics etc. described as "Lovecraftian" so let's see how they did it at Last Gasp-- it definitely doesn't get more underground than this! And let's round it all out with Larry Todd's luridly luscious "ADULTS ONLY" pin-up painting from the back cover too... and if you ask me, this piece was clearly the inspiration for the Ghoulies (1984) film! 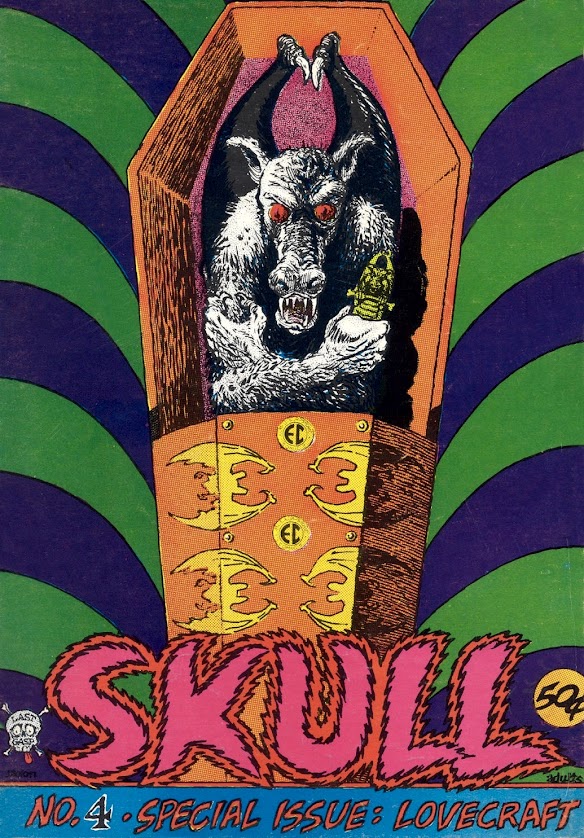 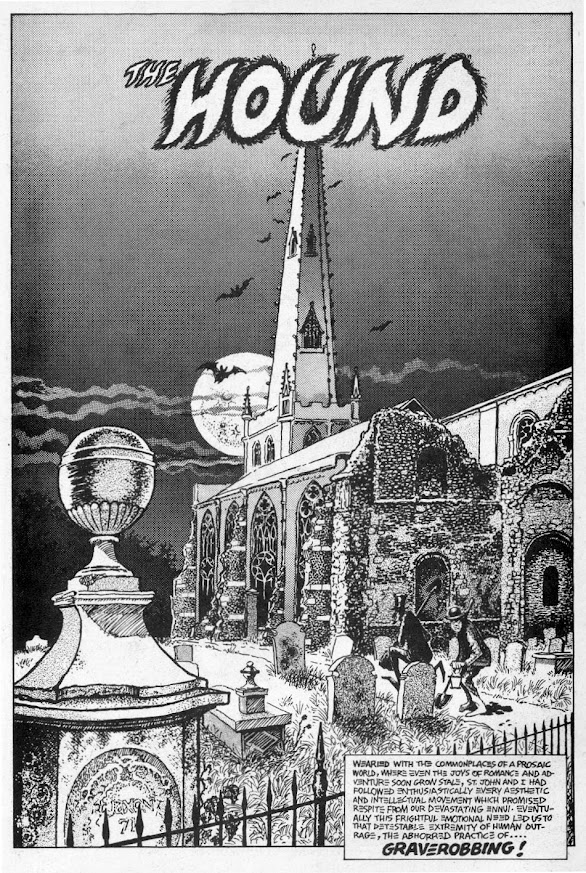 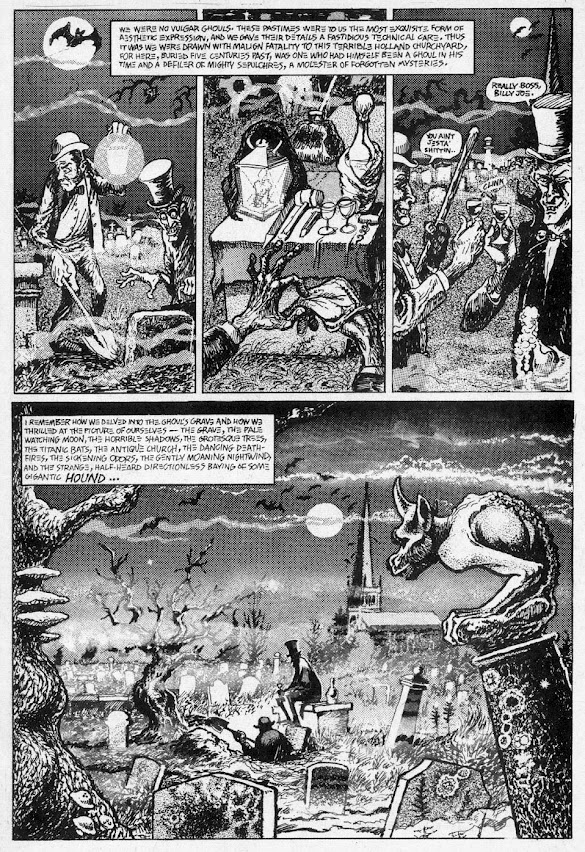 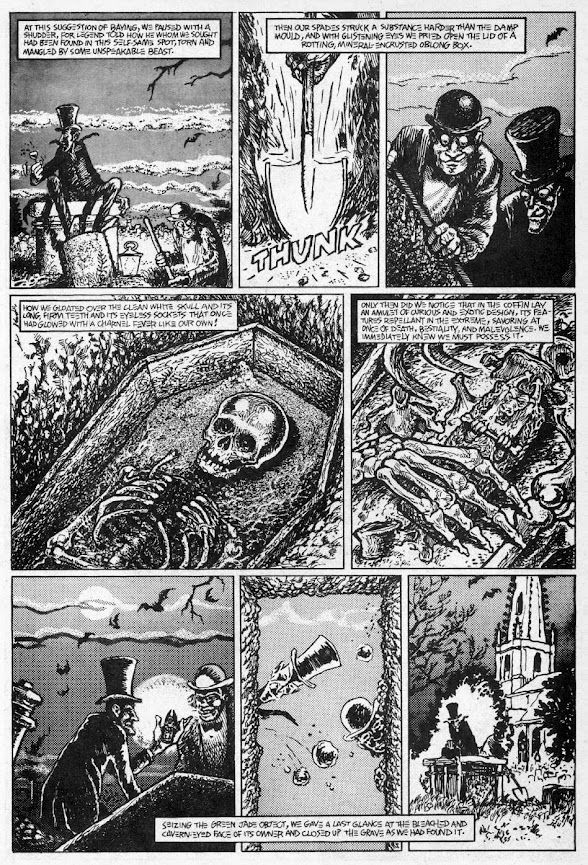 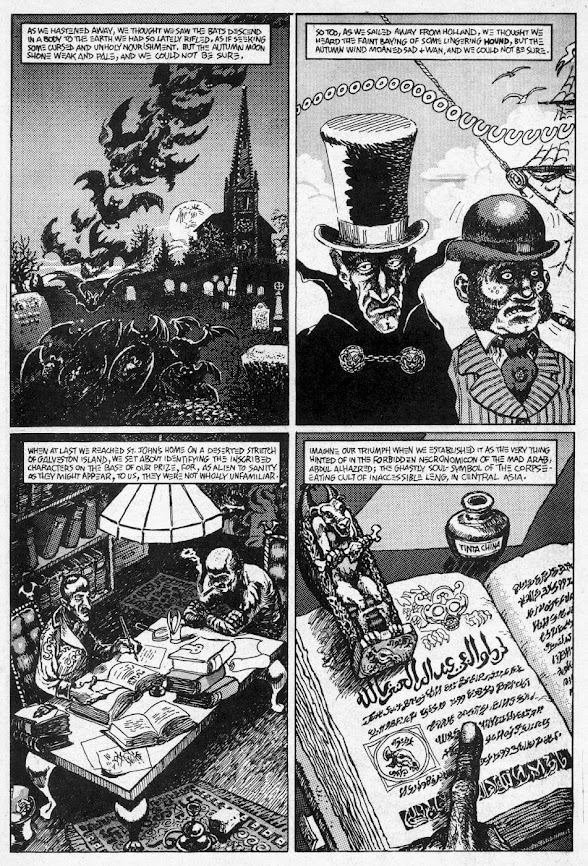 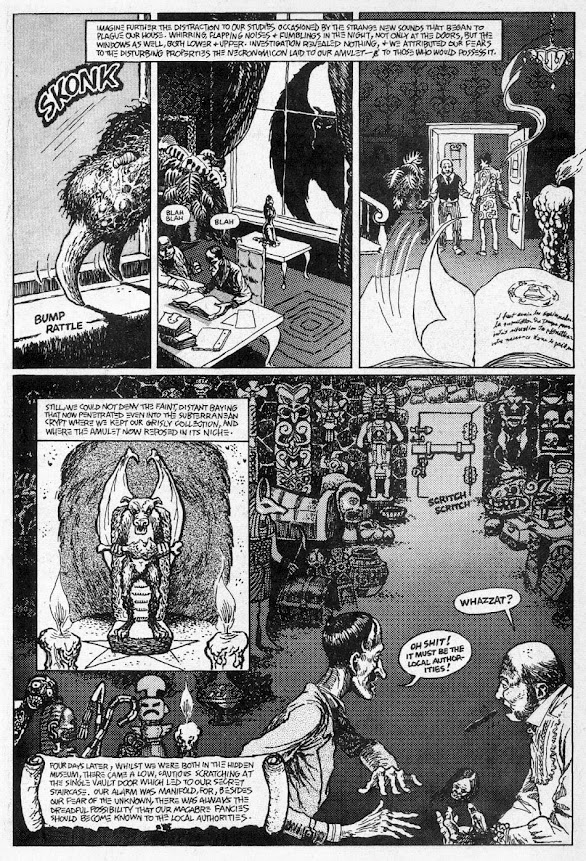 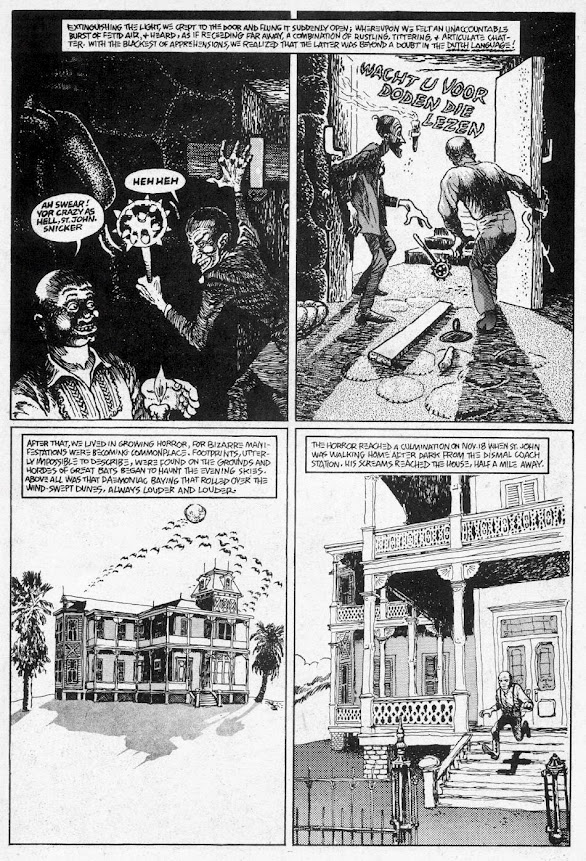 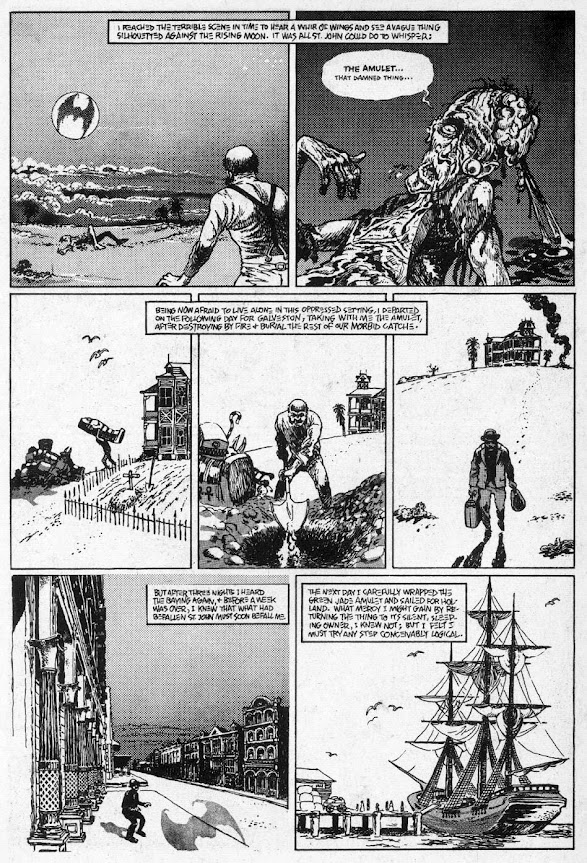 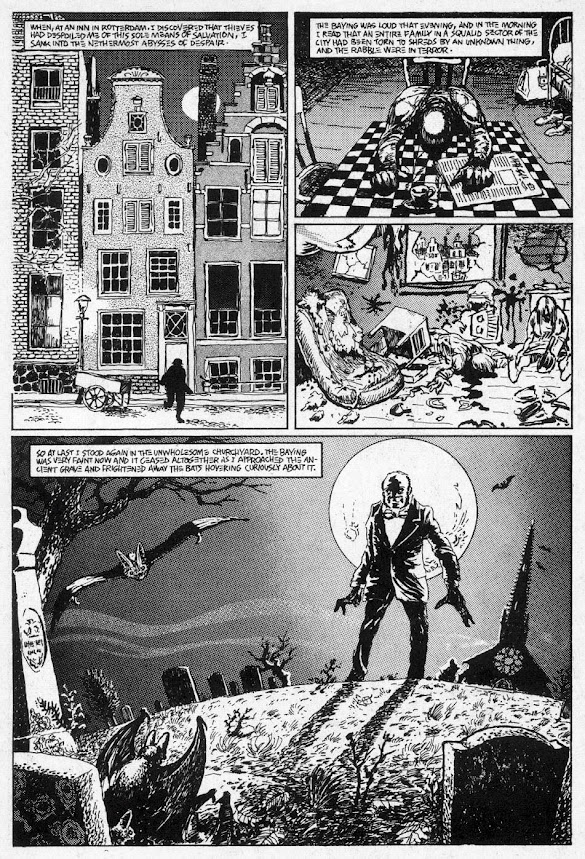 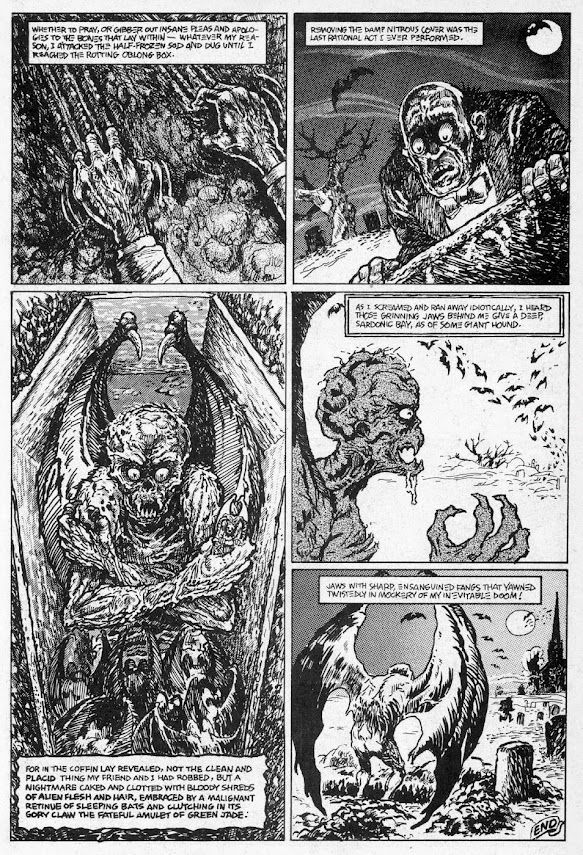 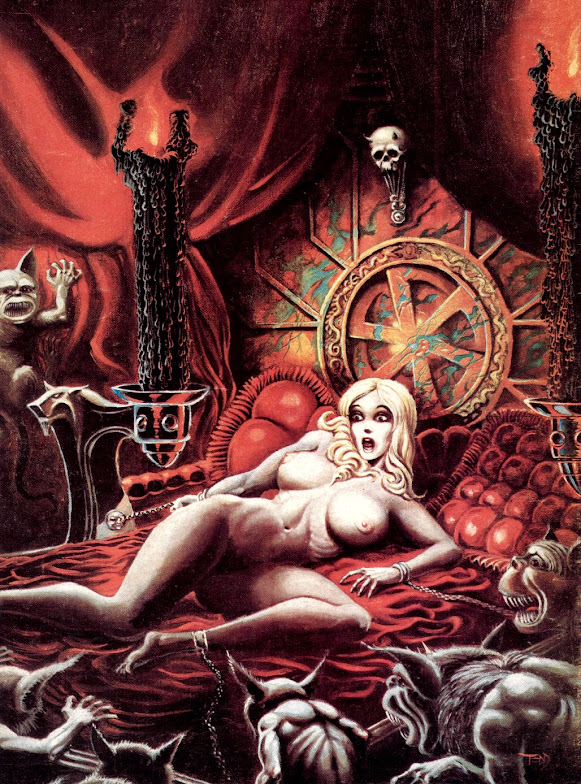 Jaxon did a great job with this. Cartoonish-yet-detailed can be a difficult style to pull off. Of course, it wouldn`t be an underground comic without some titties, which don`t appear until the back cover. Great post.

Lot to love in this one. The story works really well for it's length (though the paneling is big) and moves right along with a strong sense of dread. I like the journal like style, though I could do without the three bar E which made things a little hard to read.

The art is fantastic; the comical expressions and the cartoonish art work super well here, and our monster is a great specimen to behold, as our poor first victim.

I like how the script doesn't hold your hand; it doesn't draw a line between the stolen amulet and the family that got torn up (evidently they were the thieves.)

Last page, second panel is where you can really do cartoon-ish but perfect horror art, something Davis was a master at.

This is excellent. I've kind of had it halfway in the back of my mind to look up a page dedicated to alternative stuff from the sixties to the eighties. I miss Hairy Green Eyeball for that kind of thing. From real indie press stuff to fanzines, I just love looking at comics by people dedicated to thwarting the mainstream in some way or the other. Or, you know, creators who just don't give a toot about the supposed rules.

I've never been much of a Lovecraft fan (like, I love a lot of the ideas, but can't really make it through the prose. At least not with pleasure), so it's hard for me to tell whether this is more of an homage or a satire. It seems satirical to me. Especially in those panels where the florid first-person narration gives way to the dialect of these hick southern Texas occult antiquarian protagonists. I hope I was supposed to laugh, because I sure did. The art is, as noted by everyone, quite great.

I would certainly welcome as much in the way of alt and underground comix as you feel like sharing.

After thinking about this tale, and Lovecraft's tales in general, Lovecraft does come across as something of an outsider artist of an author.

His work was originally published in pulp magazines, which at the time was a form of outsider or proto-underground work, not mainstream work but work that was viewed by critics of the day as low brow. I guess the writers of pulp magazines got the last laugh since so many of their stories are read and reread while the critics of the time are forgotten.

Lovecraft's work gained notoriety after his passing, similar to that of Edgar Allen Poe, with both gaining fame with future fans of the frightening and macabre.

I can't add much more here, or add to what others have posted, except to say a few underground or alternative works now and then wouldn't be a bad thing to post when you have the chance. A little variety is indeed the spice of life.

As always, thank you for all that you do, Karswell, we al appreciate it.

Good comments, thanks everyone-- I'll see what else I have worthy for future underground comic posts, maybe we'll make a theme out of it for the remainder of the month. Stay tombed...

UP NEXT: A visit from QUISP!