Another thing I found at the antique mall but didn't buy, (I'm regretting this now and may go back for it) was one of Eva Gabor's International Wigs in a box from 1972. Gabor was actually quite successful in not only acting, but also in the marketing of clothing and beauty products, and to top it off (literally) she found major success with her own line of head wigs, which are apparently still in production today. Learn something new everyday! 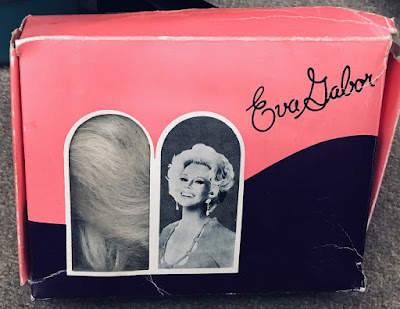 Now when I first saw this box on the floor of the vendor booth, with its strikingly simple, two color design, and black and white photo, plus the tombstone shaped cut-away window with just a peek of silver hair visible, I was hoping to maybe find a wax Eva Gabor head inside. You know, like those cool old salon school mannequin heads. "What's in the box?!" I wondered aloud, like Brad Pitt in the chilling climax of Se7en. Slowly, I took a deep breath, and lifted the lid: 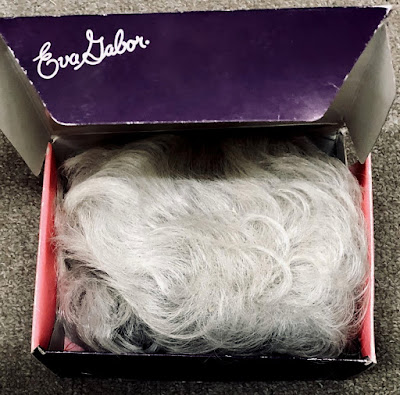 Just a wig, and very similar to the ones that I remember my grandmother working on back in the 70's when she was the Head Wig Stylist for Zayre department stores here in STL (more on that in another post someday.) But to be honest, what this brillo-esque ball of silvery webbing reminded me of most, are the oddly shoddy wigs worn by the actresses in Sam Raimi's first Evil Dead film, when, after becoming possessed by demons, their hair would turn a ridiculously awesome, evil silver color.

This has been a Karswell presentation, dahling.

I wonder if the stuff in this antique mall booth belonged to Mr. Haney?

I’m beyond thrilled that you included Evil Dead wig pics. And yeah I need more info about your gma’s job. Way more.

Man, I haven't thought about Zayre in a billion years. Love the wig (and the box). I look forward to the inevitable photos of you wearing this thing, should you happen to go back and buy it. There's always the chance, of course, that it will swallow your soul.

I would never put that thing on my head in a million years, haha... at least not until I had it professionally fumigated!

@CPC I find it hard to believe that in all the years I've know you I've never told you about my grandma and her wig related profession obsession!