Another really wonderful old nightclub brochure I found at the antique mall the other day highlights Dorothy "The Park Avenue Hillbillie" Shay performing her feudin' 'n fightin' routine sometime in the 40's at The Empire Room in The Palmer House, Chicago IL. It's a really spectacular fold-out brochure ta boot, eye-poppin'ly colorful with a neat mix of photo and illustrative fun-- not to mention that die-cut city skyline opens up to reveal a bunch of bearded hillbillies gathered 'round the 'ol turntable of Shay classics on vinyl! Ya-hoo, break out the mountain dew and give'r a LISTEN! 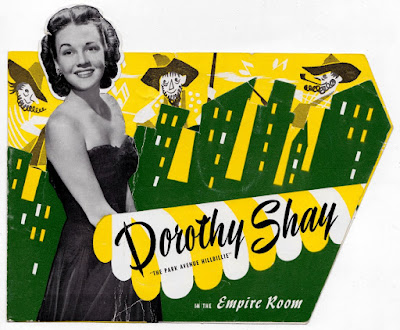 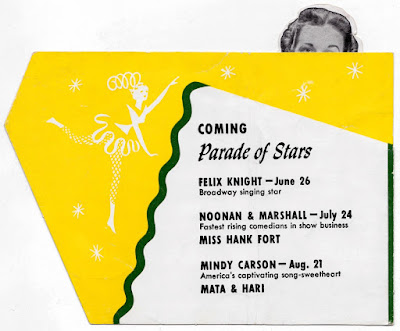 Find out more about Dorothy Shay HERE, she had quite the singin' 'n actin' career with a #1 selling record (and she was also the first woman to ever top the Billboard charts), PLUS she appeared in the Abbott and Costello comedy classic, Comin' Round the Mountain, --and yes, she was The Dew Drop Inn's very own Thelma on The Waltons too!
Posted by Mr. Karswell at 9:24 AM

This is a knockout! The city design is great, and I love the juxtaposition with the rural cabin on the reverse. What a cool document. It'll look good displayed right beside the Forbidden City card too, since the primary colors really jibe. Next you'll have to find a blue one. I hope it's for a voodoo lounge!

Man I love that skyline. And the hillbillies are freaking awesome!

I second a voodoo lounge card post! Get on that!

So they let hillbilly's flying high on Mountain Dew in with their shootin' irons in to see a sexy singing star? That place must have been a ruckus every night!

Curious, did anybody listen to that Feudin' and Fighting' song? It's hilarious, and her voice is awesome

"Hillbillie"? She's from Florida for land sakes. It really is a pretty funny song in a Li'l Abner kind of a way. She's like the female Johnny Horton. It very much amuses me to imagine hillbillies being a decoration theme for a ritzy urban nightclub act.