Another neato thing I found recently was this kitschy asian skier, made of carved and painted wood, stretched cotton (for snow), and colorful stuffed fabric pieces of varying textile. It's about 6" tall, plus there's a lone nail sticking up in the back which makes me think that maybe something's missing from my newly acquired, vintage tourist knick-knack. He does look a bit sad holding his skis and hanging out under that sign waiting for some snow to fall (BTW: does anyone know what the sign says? Google Translate literally exploded when I attempted to figure it out myself!) 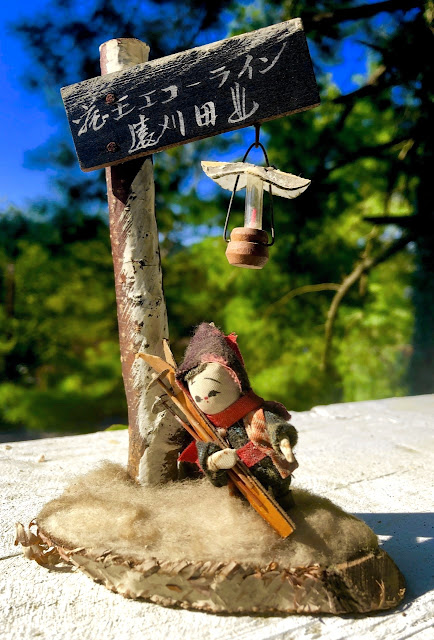 I guess I wasn't helping matters by photographing him on my deck with about a week of summer left here in 2019, so in an attempt to turn that frown upside down, I took a second photo of him against a white wall (to simulate a more wintery setting), and good lord, if he doesn't look even more miserably cute! Ahhh well, I tried. I'm assuming this is from the 60's or maybe 70's, or could be even earlier. I can't get enough of that adorable tiny lantern suspended above his head either! 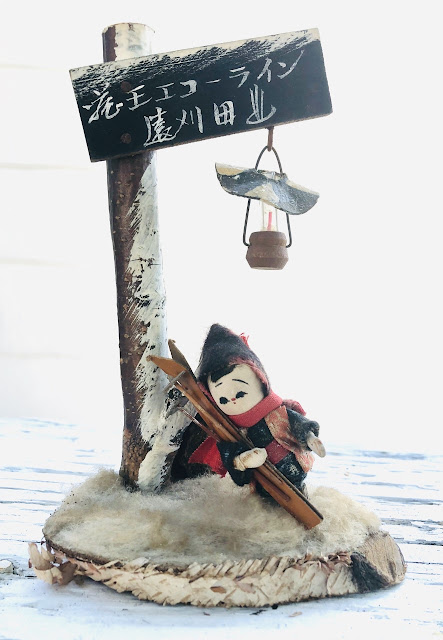 Mestiere said...
This comment has been removed by the author.
September 16, 2019

Nope, no filters... just adjusted the contrast a wee bit.

Awww! That’s cute! I love the lantern too.

You need to open up a museum!

Mestiere said...
This comment has been removed by the author.
September 17, 2019

That's really cute, but the age on that snow makes it look like ferret pelts. Take a picture of it in your freezer!

>You need to open up a museum!

> just to find out the sign is the most offensive thing ever!

I do hope that it says something funny though!

> Take a picture of it in your freezer!

Freezer kitsch is so 2012... don't you remember my cryo facebook posts about Zander putting his Sesame Street toys in the ice trays??? haha

Thaks for the comments! :)