One of my all time favorite TV shows from my childhood (and from Japan) is Johnny Sokko and his Flying Robot ('67 - '68.) And recently, thanks to Bizarre Bazar in Philadelphia, I added this great vinyl figure made by Marmit in '96 to my personal toy collection! He's so awesome I literally took a billion pix of him, but here are just two because I'm not totally insane like Emperor Guillotine. The only way GR could more awesome is if he shot actual missiles out of his fingertips --and also if he was ten hundred feet tall instead of ten inches! (see also: FLYING) 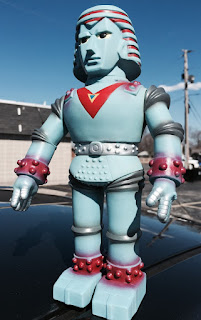 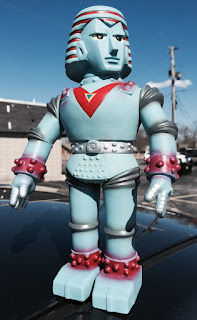 Alllllllso, one of my all time favorite movies from my childhood (and from China) is Super Infra Man ('75), and recently Unbox Vinart teamed up with the Shaw Brothers to release what is seriously one of the most killer 10" vinyl figures ever-- Super Infra Man!!! Incredibly colored, his helmet is removable to reveal the actor underneath, plus he has a back-up set of alt colored fists you can swap out. The box design is just as spectacular. 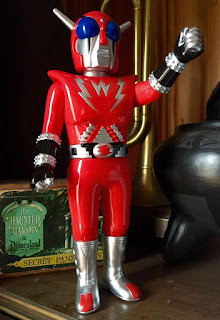 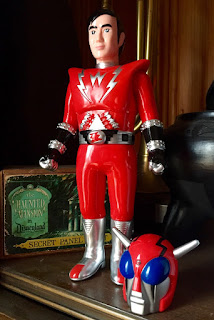 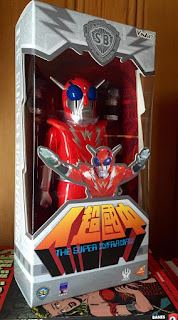 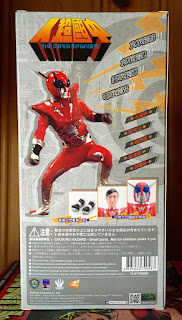 Get more info and order your Super Infra Man HERE! Also-- if it's villains yee be after, then click HERE for info about Unbox's awesome Skeleton Spectre pre-order too! You know you need somebody for Infra Man to fight!!
Posted by Mr. Karswell at 9:27 AM

Holy Moley that Inframan figure is awesome! (And the Skeleton Spectre, natch.) I have got to dig that movie out again sometime soon. I like Giant Robo too, but the overspray on the red paint is a shame. I mean, it hardly ruins anything, but it keeps distracting me while I'm adoring the figure.

The over spray doesn't bother me in the slightest... in fact, it feels more like an intentional design choice for this figure, in the same way people intentionally off register color in comics, or distress tee images for a retro vibe

Yeah, I assume it was intentional, too. I dig that kind of thing far more when it's accidental (but have myself been known to distress and screw up the registration of things for effect). It's no deal-breaker, I just think I'd like the look a little better if the wrists and ankles were the same as the chest.

For some reason the dark over-spray on the knees and elbows doesn't bother me a bit, though. So maybe it's just that fact that there are two kinds of red here, then. I don't know. Now I'm going to have to buy my own and look at it all the time in my room. Just to meditate on my opinion.

Hi Karswell, Do you or anyone you know have any experience with Unbox Industries? I would like to have a designer doll created and I'm looking for a company to make a limited run. It looks like a cool company.

Sorry no... just the occasional purchase. Try writing to them-- good luck!