A few years back I picked up a crumbling stack of hilarious old issues of Ballyhoo Magazine from the 30's. Ballyhoo was pretty much the National Lampoon of its day, full of hilarious gags, stories, tons of great cartoon art, and fake ads, like this one for Persimmons Beds, Springs, & Mattresses. Unfortunately, this particular ad is in a million brittle pieces, pulled loose from its original issue (and found floating in a separate one) and it's possibly incomplete. But I've managed to salvage a few of the cutely illustrated panels, as well as a bit of the text that reads as follows:

"Sleeping LIKE THIS is the bunk-- lantern slides prove in convincing studies by bed specialists at Hot Springs. Sleeping "like a horse" has always been considered the ideal form of rest. Until now. Now it is known that nobody sleeps like a horse except horses and pony chorus girls. And besides, our investigators have proved that people who sleep like horses are troubled with nightmares which necessitates sleeping with a Colt under your pillow." Very funny stuff (Nov. '32.) 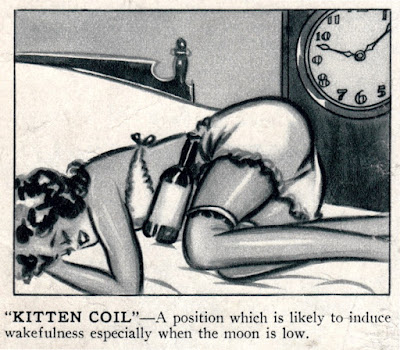 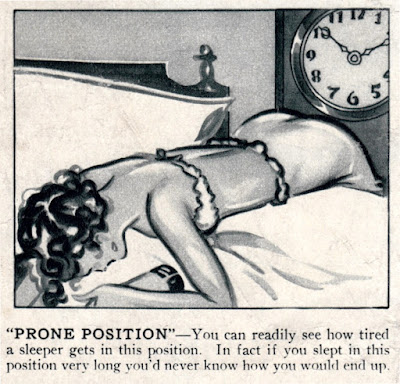 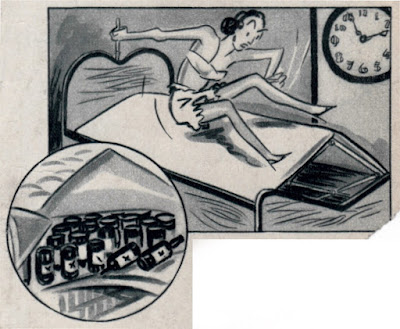 I'm a pretty big fan of the kitten coil, myself.

I pretty much live my life in the GONE! position

You seem like more of a "GOING!" type to me.

"Going style." I'd really like to insert those three panels into the funny pages every day, with different existential or surrealist dialog in word balloons. Kind of a girly mag version of David Lynch's Angriest Dog in the World.