Wow. Who would've ever thought that one of the most entertaining 60's product catalogs I've ever stumbled upon would come from a lumber company! But here it is, Sutherland's "Greatest Sale on Earth" catalog-- or judging by the size and general design of it, it's probably more like a newspaper supplement, maybe. And I guess it's from the 60's, looks 60's anyway... anyway, among the fascinating "must buy" items like dryer vents, auger bits, galvanized fittings, and jambs, comes a dozen plus circus-esque pages of cute photography, terrific typography, and illustrated actors and actresses from the golden era of Hollywood (and beyond) made to look like sensational players in a big top ballyhoo of bonanza style bargains! Do all the extraneous bells and whistles featured here really work on carpenter types and home fixer-uppers? While I am neither, those sexy Cleopatra sandals and garter snappin' illustrations would have certainly had me rolling up the windows, locking the doors, and heading into the urban wilds of the most drug-infested, crime riddled city in the good 'ol USA-- East St. Louis, IL! Man, seriously-- do not get yourself killed over ceiling beams or knobs just to save a buck! Sheesh. 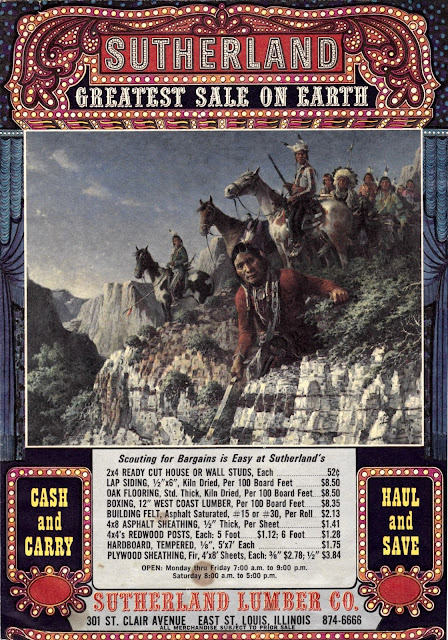 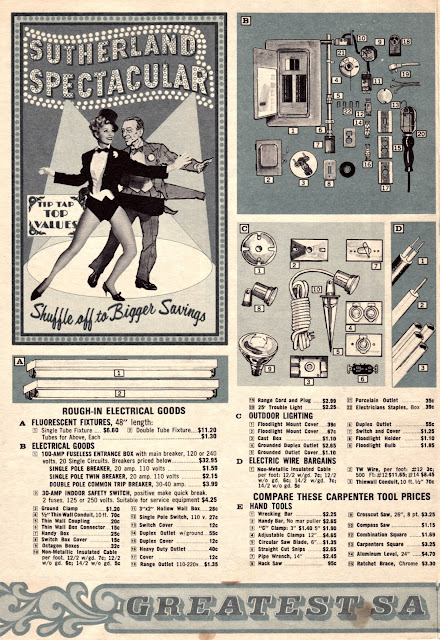 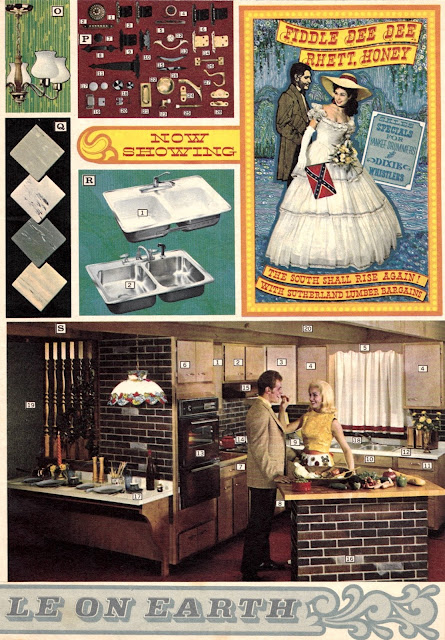 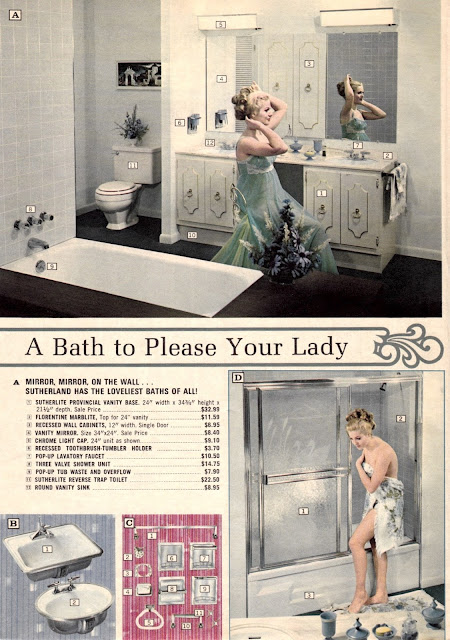 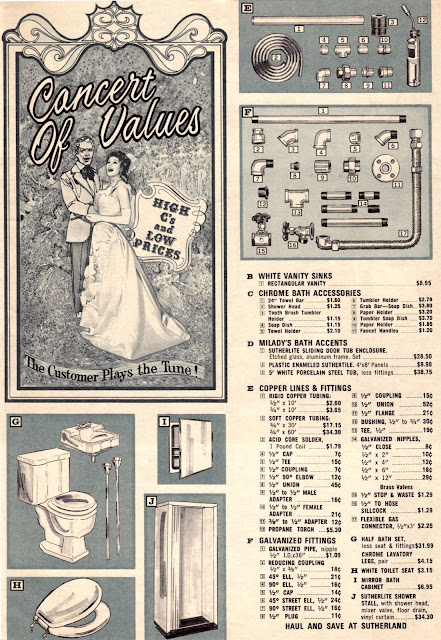 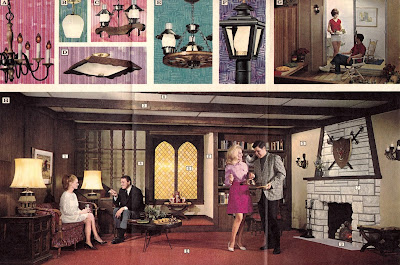 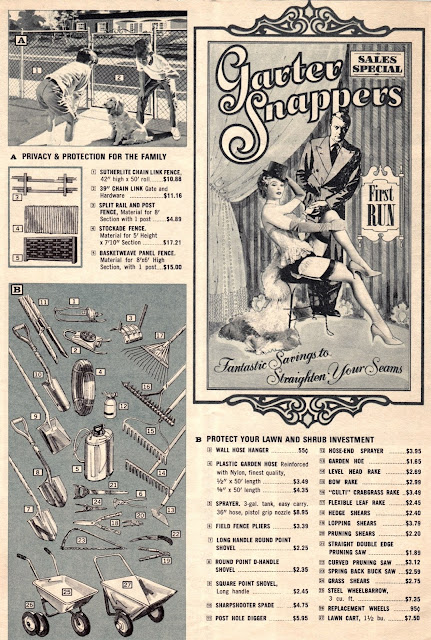 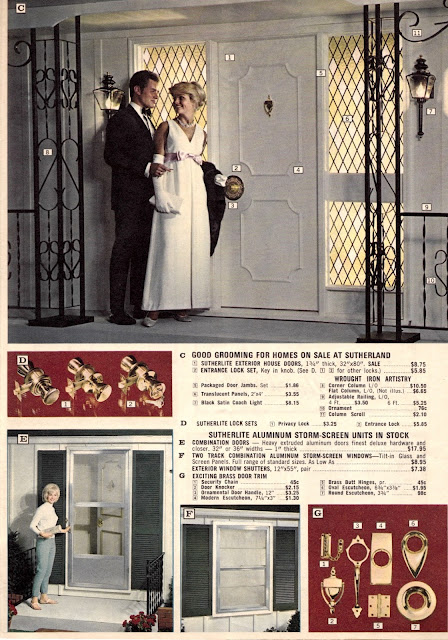 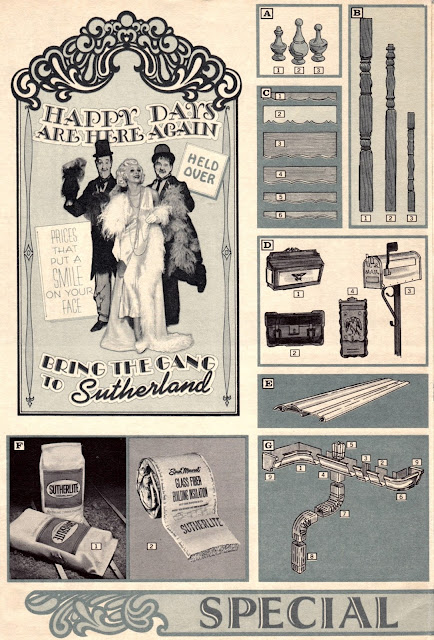 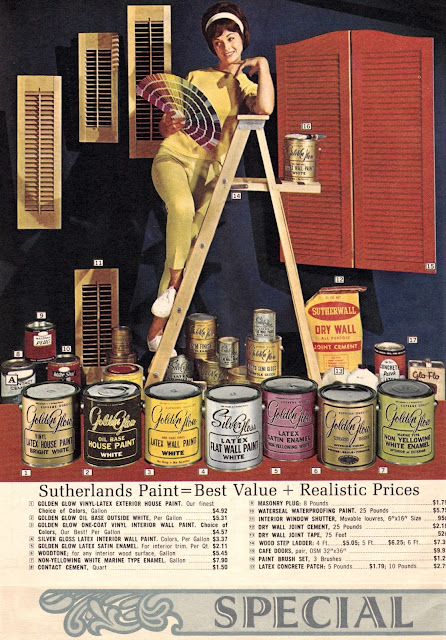 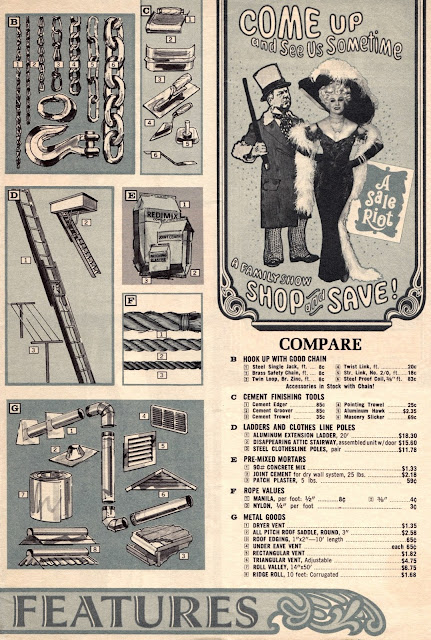 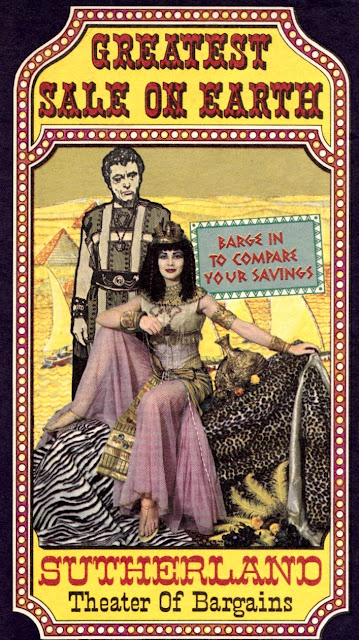 wow i seriously love all the faux brick (the kitchen and the white fireplace), the funky wallpaper, and the completely paneled living room. the dark wood color scheme almost seems 70s even though the hairstyles are more 60s. maybe it's a 1969 catalogue. still in the 60s but just on the verge of being 70s :)

Can you imagine a hardware store put this much effort into an ad these days? Whoever created that was extremely talented. Hope he/she moved on to better things.

And hey, don't pin East St. Louis on us Missourians. That's across the river in Illinois. The nerve!

Haha, I live in STL too so I know where the east side is 😊 just having some fun with my locals, we hear that kind of stuff all the time, in the same vein that the rest of the world thinks Ferguson is a complete representation of Missouri.

Heck, here in MO it's 2015 and I still see those lovely hairstyles and faux paneling!

For some unknown reason, this big sale reminds me of this-

Pretty neat catalog. I'm always a sucker for these ordered and numbered sales panoramas, but they seem so much weirder when the subjects are sitting in nearly empty rooms. It's like all the toys and clothes and usual Sears and Roebuck stuff has been removed and only their labels remain.

Think I like the art best in the panel where the two kinds are playing with the spaniel. It seems like more of this catalog's slightly off-kilter way, reflecting a commercial illustration style I'm more used to from crime and men's adventure mags--what with the low contrast grayscale washes--but with some applied warm "greatest generation" bonhomie. Like seeing the Beav in a lurid True Romance splash page.